The Mill, Part 1: Now We Are Brody 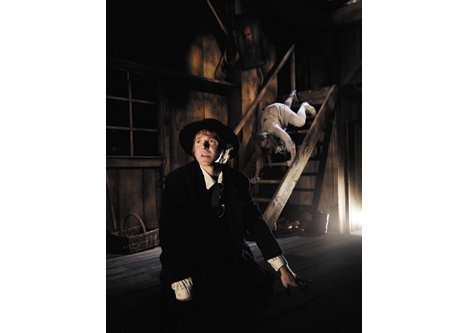 Ryan Hollyman and Holly Lewis arent run of The Mill.

The expression “put through the mill” takes on gruesome new meaning in Now We Are Brody, the first entry in Theatrefront’s The Mill, a four-part look at the history of a haunted Canadian building.

The scene in question involves a huge circular saw that – thanks to Gillian Gallow’s realistic set, Richard Feren’s suggestive sound design and the hilarious twitchings and protestations of the play’s villain (played gleefully by Maev Beaty) – almost matches something from a horror movie. It’s big fun.

Set over a few weird weeks in an isolated mill in 1854, the play concerns Charlotte MacGonigal (Michelle Monteith), who passes the time quietly (almost too quietly – a bit more action would help orient us) until she starts noticing dead birds, a lusty French-Canadian neighbour (Eric Goulem) and, oh yeah, the ghost of a girl named Lyca (Holly Lewis) who may have been killed by Charlotte’s own father.

Matthew MacFadzean’s script, peppered with a few campy one-liners, has a contemporary feel that contrasts with the period setting, but it could use a bit more subtext. Is it simply a sins-of-the-fathers ghost story? The fact that Beaty’s character is named Rebecca Jessup suggests there could be more turns of the screw to come.

But Charlotte herself remains too enigmatic, and her journey from woman roughing it in the bush to possessed creature lacks a beat or two.

No doubt questions and motivations will be cleared up in Part 2 (see review here), which is set 20 years earlier.

But under director Daryl Cloran, the production feels hugely atmospheric. Love the fresh wood smell from Gallow’s set, and if you like the Evil Dead movies, you’ll appreciate all the surprises when the horror gets cranked up.