The Mill, Part 2: The Huron Bride 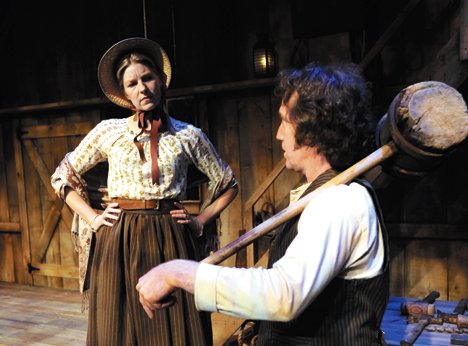 You’ll probably have the shit scared out of you by Hannah Moscovitch’s The Huron Bride. The second installment of The Mill, a four-part series of supernatural tales set in Upper Canada, is full of mysterious things that go bump in the night.

The first part, We Are Now Brody (reviewed here), follows the fearsome adventures of the mill builder’s daughter the second part takes place 20 years earlier, when the builder’s young orphaned cousin arrives from Liverpool to work at the mill.

Though the two plays share several characters, they’re different in style. Brody resembles a contemporary horror film with its trail of blood and body parts Bride is an old-fashioned ghost story, the scariness suggested rather than overt.

James MacGonigal (Ryan Hollyman) is quickly drawn to his cousin Hazel (Michelle Monteith), as is his French employee Alexandre (Eric Goulem) that latter attraction causes trouble for Rebecca Jessup (Maev Beaty), a gossipy woman with her own interest in Alexandre.

Hazel senses something ominous in the mill, partly due to sights and sounds she can’t account for and partly due to a mysterious blond foundling (Holly Lewis) who chants in an aboriginal language, makes cryptic comments and sheds white feathers. Only when James is honest about his past do things become clear, if no less frightening.

Christian Barry’s direction conjures up the right mood from the start, the exchanges between Hazel and Rebecca hinting that there’s something disquieting about the mill and its history.

The piece is richer for Moscovitch’s mixing of humour and fear, from the introductory scene in which we’re addressed by a droll archaeologist (Richard Greenblatt) who blends who blends academic theories with the mill’s upsetting history.

There’s also a comic charm in the awkward courting between Rebecca and Alexandre, well played by Beaty as the prudish but sexually interested Rebecca and Goulem as the passionate Frenchman.

The play is filled with emotional reality Monteith and Hollyman anchor the story with their growing sensuality. She projects a quiet seductiveness, while he’s a fiery man determined to have his way with nature and the women in his life.

Still, all the elements work in the service of the macabre narrative. Helping to give the production its nightmarish flavour are Gillian Gallow’s dominating wooden set (it fills half the theatre), Andrea Lundy’s marvelous lighting, Richard Feren’s atmospheric sound design and Dana Osborne’s period costumes. Even Ben Chaisson’s projections have a spooky quality.