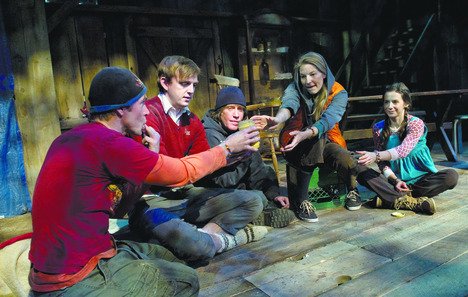 Ash, the fourth and final part of Theatrefront‘s inventive cycle The Mill, lays a spirit to rest.

The spirit in question is the jealous Lyca, ghost of a 17th-century child who is part Wendat (Huron) and the generations-old source of the mill’s deadly curse.

Damien Atkins‘s play ties up the plot, focusing on a group of young people who have taken refuge in the mill. The five, who may be children or just childlike, are cared for by a “father” (Richard Greenblatt) whose motivations are complicated.

Set in a sparse world, the script is equally bare by intention, shorn of imagery and details. Much of the communication is unspoken, and this fine team of actors – including Michelle Latimer, who makes an eerie appearance at the play’s start and end – expands the characters’ emotional richness while revealing, under director Vikki Anderson‘s careful shaping, the relationships in this unusual but recognizable nuclear family.

Atkins teases out all sorts of surprises, carrying us along on every plot twist. But unlike the other shows’ tragic conclusions, here there’s the possibility of love and rebirth, a chance to create a new home filled with laughter instead of tears.

A script like this relies on atmosphere as much as on text, and that requires a strong design team. Gillian Gallow (set), Laura Gardner (costumes), Andrea Lundy (lighting), Richard Feren (sound and composition) and Ben Chaisson (projections) help make this a first-class production.

Bravo to Theatrefront for taking a risk with The Mill and coming up with such exciting theatre.