NOW MagazineCultureTheatreThe Monster Under The Bed

The Monster Under The Bed 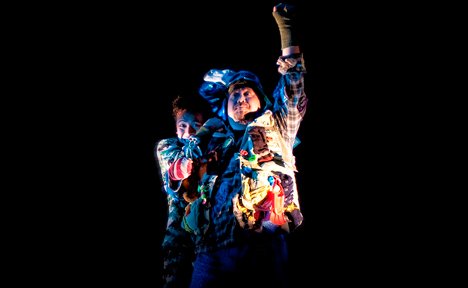 Bedtime stories can be lots of fun, but kids sometimes think they’re too short.

Unfortunately the same isn’t true of Kevin Dyer’s The Monster Under The Bed, now at the Lorraine Kimsa Theatre for Young People, with added performances during March break.

The story’s sure to appeal to any kid, young or old. Ben (Darrel Gamotin) has fought with his best friend Vince (David Yee), who stole the binoculars that Ben’s soldier dad gave him. When Ben discovers a young monster (Danny MacDonald) under his bed, the two switch places for the day: the monster goes to school to get even with Vince and Ben stays home, not aware that he’ll have to deal with the monster’s scary father (Paul Sun-Hyung Lee).

Dyer’s play, which intentionally echoes bits of several dozen children’s tales, touches on some powerful topics, including friendship and the closeness between parents and children. Director Nina Lee Aquino hits the right points in her engaging, energetic production.

The problem is the script, which feels about 20 minutes too long, and not only for its young (six-and-up) audience. There is an overabundance of scenes at school, where the monster has to deal with teachers, Ben’s girlfriend Celine and other fellow students. Yee and Marie Beath Badian are often funny – especially Badian’s Celine, not unlike the dictatorial Lucy from Peanuts – but the episodes aren’t all necessary.

Things are better at home, where Gamotin and Lee (also cast as Ben’s father) fight, play games, bond and discover each other’s fears and strengths. Lee’s monster dad is the production’s most defined character, and he entrances the audience whenever he’s onstage.

Oh, the stage. Like El Numero Uno, the last production at LKTYP, the presentation is in the round. But what worked there is less successful here action is sometimes obscured from part of the audience and lines delivered to one section of the theatre don’t always carry to another.

Designer Camellia Koo’s inspired set is a huge bed with surprise sections, and she’s also littered the whole theatre with randomly placed single socks, the kind that disappear under a child’s bed. That’s exactly the point: as costumed by Koo, both monsters are composed of such lost items as socks, playing cards, bits of jump-rope and other odds and ends.