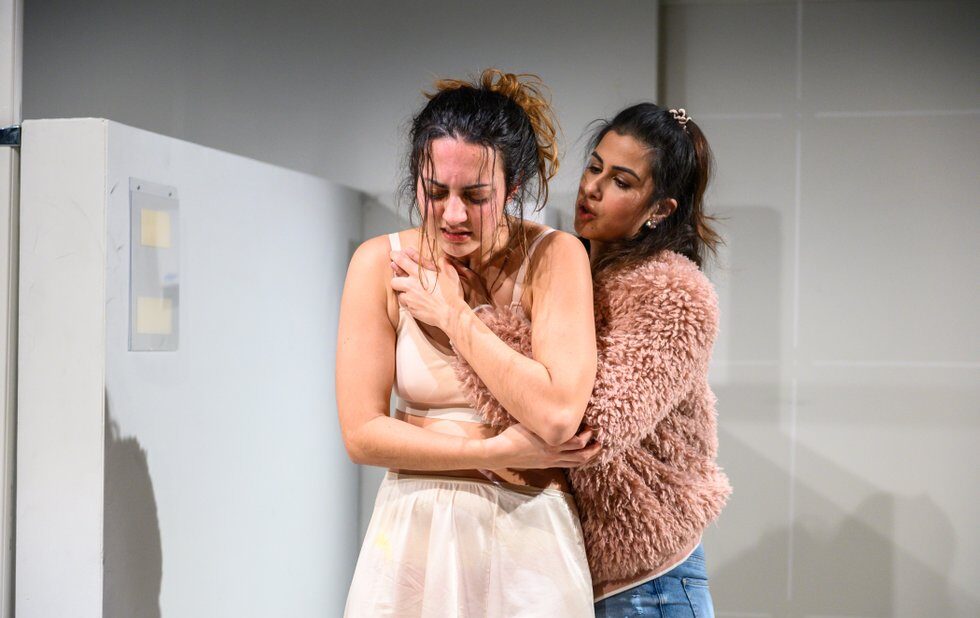 Mules is set entirely in a womens washroom. With merely a few rows of audience seating abutting Brandon Kleimans realistic and highly detailed set, you quite literally feel as if youre in the lavatory with the characters. But just as in many public toilets, not everything about this play goes down as smoothly as youd hope.

Replete with equal amounts of dark humour and tragedy, Mules (written by Beth Graham and Daniela Vlaskalic) reunites two friends, Crystal (Eva Barrie) and Cindy (Anita Majumdar), a few years after high school. In a scheme to make some quick cash to relieve their financial burdens, Cindy convinces single-mom Crystal to smuggle drugs from Bogota to Vancouver. The play begins with them infiltrating an airport arrivals washroom so Crystal can excrete capsules of cocaine from her body before Cindys violent boyfriend tracks them down. Events take an even more horrifying turn when janitor Troy (Tim Walker) shows up to clean.

The acting is solid. Both Barrie and Majumdar create characters whose desperation transcends friendship. Crystal, the naive one, constantly recalibrates her reactions to the situation like a cars GPS on a wild route. She struggles to cope with circumstances clearly out of her depth. Majumdars Cindy is frighteningly conniving. And while Walker spends less time onstage than the others, his presence pushes the already lofty stakes even higher.

The plot includes exciting twists, but ultimately the script disappoints. While it divulges some of the backstory during the plays calmer moments (they chat a lot while Crystal spends time on the toilet in a stall), the characters never manage to transcend stereotypes. Also, the story requires too much suspension of disbelief. Since when does ex-lax work that quickly? And why dont Crystal and Cindy just find a family bathroom to avoid the whole confrontation with Troy in the first place?

Simon Fons fight choreography is mesmerizingly violent, especially with the audience in such close proximity to the stage. Vikki Andersons staging includes much physicality and humour, plus an abundance of gross-out moments that make the audience gasp.