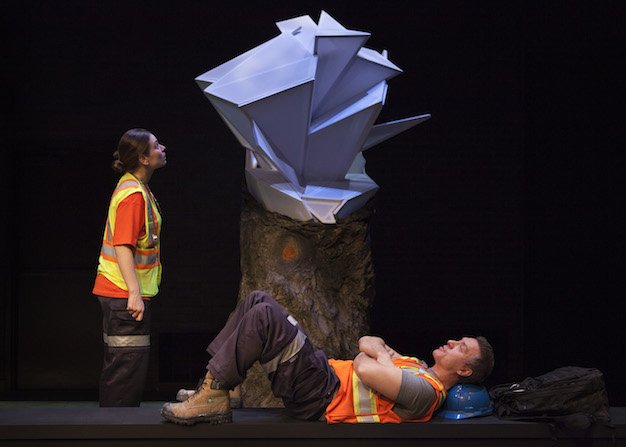 There’s nothing more ordinary than the start of Sean Dixon’s The Orange Dot: two city workers, Natalie (Daniela Vlaskalic) and Joe (Shawn Doyle), wait on Roncesvalles for a rig to arrive so they can take down a silver maple, presumably decayed.

At the start of the show, Natalie paints the titular orange dot on it, a familiar mark that suggests it needs to be cut.

But partway through the one-act play, the action shifts to a different plane.

Until then, you might think the two-hander will become a romantic comedy, with the party-hearty, Down East-accented Joe sometimes flirting with Natalie. Early on, she regularly returns the ball and forgives his sometimes insensitive, mansplainer, macho faux pas. He apologizes for them, realizing that he’s being “harrassy.”

Dixon makes comedy with their talk about ISIS, defiling museums and Presbyterian terrorists from Scarborough, using social media and Google to give the pair grist to fill time while they wait for the tardy rig.

He also seeds the early part of the script with figures like Wonder Woman, Charlie’s Angels and Amal Clooney, female role models who become more important toward the end, as Natalie becomes increasingly irritated with Joe’s talk.

This is a play that wouldn’t succeed as well as it does without references to and use of cell phones, BuzzFeed and Facebook.

The actors, working with director Vikki Anderson, set up a believable chemistry early on, which gives a strong framework for the move away from naturalism and into a fierce, angry sensuality in the play’s last third.

Vlaskalic provides Natalie with a convincing dual personality, while Doyle subtly underlines Joe’s insecurities and attempts to connect with his co-worker. The TV and film actor hasn’t been onstage for nearly a decade, and I hope it isn’t as long again before we see him in another play.

Joanna Yu’s simple set and stylized tree play with both the script’s tones, as do John Gzowski’s sound and Siobhán Sleath’s lighting sight and sound alert viewers to the fact that they’ve journeyed into a Twilight Zone of a story.