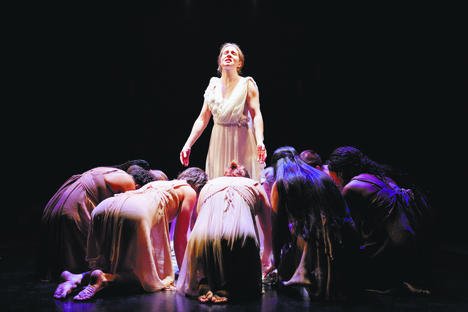 Megan Follows and the all-female ensemble embark on a beautiful odyssey.

How often is the designer the star of a show?

No question that the hottest collaborator in this Kelly Thornton-helmed production of The Penelopiad is set, projection and costume designer Denyse Karn. That’s saying something, given that the ensemble here is off-the-charts great and the play is written by Toronto’s favourite library supporter, Margaret Atwood.

Karn creates spectacular visuals – right from the opening image – for this feminist take on the story of the wife that the wily Odysseus leaves behind when he goes off to fight the Trojan War.

Sometimes the beauty is in the costumes: an ingenious wraparound wedding dress that ties up in a bow that becomes a bouquet, or the gorgeous deep red train of Helen of Troy’s dress. At other times fabric is deployed in ingenious sets: a swath of turquoise representing the stream where the baby Penelope almost drowns, or a golden sail on Odysseus’s ship in one of the play’s most striking images.

The story follows Penelope (Megan Follows) from birth, to her betrothal to whoever wins a foot race, to her marrying and then falling in love with the victor, Odysseus (Kelli Fox), who eventually goes off to war. While he’s gone, she must fend off the predatory suitors, whom she placates by getting her 12 maids to meet their sexual needs. They’ll be rewarded later, she assures them.

The play doesn’t exactly ooze emotion, relying more on wit and humour. Helen is treated as a running joke, and a line about how aristocrats shouldn’t mess with the arts got a big laugh. But The Penelopiad soars thanks to the visuals, the fabulously androgynous Fox, and superb movement choreographed by Monica Dottor for an ensemble of actors, many of whom are stars in their own right: Tara Rosling, Raven Dauda, Maev Beaty.

The show takes a dip in the second act, needing more spectacle to balance out Act I, and Follows isn’t the powerhouse she should be, but this is a superb show – smart, beautiful and superbly executed.