Margaret Atwood's sly, ironic look at one of fiction's most patient women is a thrilling ensemble production 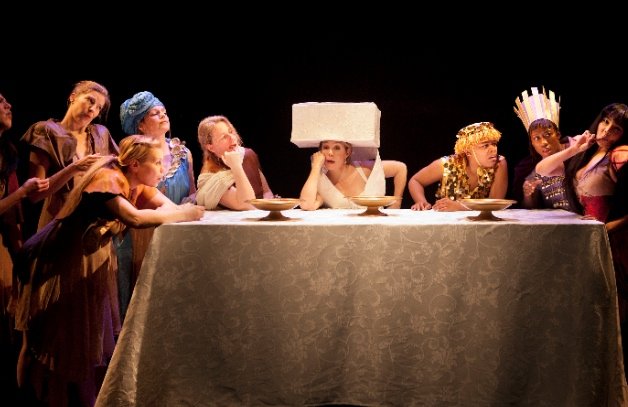 Margaret Atwood’s The Penelopiad gives Greek epic an ironic twist that’ll have you laughing one minute and pulled up short with shock the next.

Nightwood Theatre premiered this production last year, and the remount, with four new cast members, is in some ways more powerful than the earlier version credit a rich story that the company digs into deeply.

Atwood’s script is a slyly feminist take on Homer’s story of the wily king Odysseus, who left his wife Penelope and home of Ithaca to spend 10 years fighting the Trojan War and then another 10 trying to make his way back to spouse and country. That second decade of wandering wasn’t all his fault, but he clearly didn’t object to the time he spent adventuring or in the arms of curvaceous goddesses. That’s what guys do, right?

The tale, told here by Penelope (Megan Follows), begins in Hades death gives her a perspective she never had in life. Beginning with her own childhood, Odysseus’s winning her as a bride, her life in goat-filled Ithaca and finally patiently waiting and dealing with demanding suitors who show up when she supposedly becomes a widow (and desirable trophy), Penelope slowly unveils the tragedy that dogs her steps even in the underworld.

Under director Kelly Thornton and with a wonderful design by Denyse Karn, the production is dotted with magical moments the first act is largely comic, setting up the sombreness of the second.

Part of the enchantment comes from Monica Dottor’s choreography and Suba Sankaran’s sound design, performed by the 13-member ensemble. Most members take on multiple roles, including the innocent maids who wait on Penelope and help her fend off the loathsome suitors (also played by the company).

Follows brings a deeper, more textured look at Penelope this time around, her warm smile not fully hiding the tragedy that lies at the base of her reminiscences. She may mock herself at the show’s start, striking poses of classical statues, but she still takes us into Penelope’s heart and the pain of what she’s unwittingly done to those closest to her.

Her scenes with Kelli Fox’s Odysseus are always resonant, the actors generating a playful, many-sided chemistry. She learns to love him, but his feelings for her are less easily read. Over time, Penelope and Odysseus become aware that each offers a mask to the other and knows that the other realizes it, too.

Atwood’s script touches on several contrasting, interrelated topics. There’s the disparity between the privilege of the rich and the worthlessness of slaves, the power of men and weakness of women, male attraction to physical beauty and the invisibility to men of those who lack that beauty.

If you didn’t see The Penelopiad last year, don’t miss it this time around. And even if you did, it’s worth a revisit to catch the added nuances.