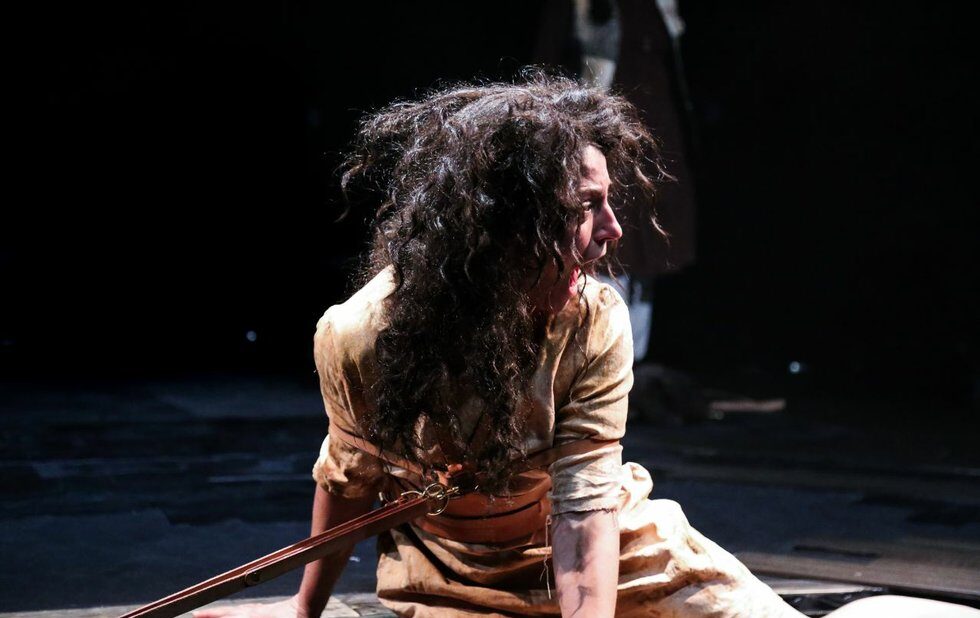 Set in some feudal terrain on the cusp of the Enlightenment, the inaugural production in Susanna Fourniers Empire Trilogy is a transporting speculative gothic, one that strikes with the force of an exacting drillmasters hand.

The play concerns an affluent philosopher (Fournier), ostracized for his atheism, who hires dog trainer Tereza (Aviva Armour-Ostroff) to rehabilitate his wife (Chala Hunter), who, in the wake of recent traumas, has started behaving like a savage canine.

The Atwood-esque premise is precariously schematic, but the execution is infused with intriguing particularities, psychological acuity, and a wild, vivid carnality that sweeps us far away from the coziness of mere allegory.

Director Leora Morris stages the show in the round on set designer Shannon Lea Doyles vast, gloomy platform, from which pools, wood stoves and dungeons seamlessly emerge. The production builds its alternate past without undue exposition: some scenes are talky, others intensely physical.

Kaitlin Hickeys lighting design seems endlessly resourceful, capable of evoking both the thrill of racing through woods of stuttering sunlight and the gloom of an opium-addled pauper (Danny Ghantous) struggling through illness by firelight.

Christopher Ross-Ewarts soundscapes are immersive, though nothing coming from the theatres speakers is more powerful than the pounding of chains on the floor or the trickle of water as Tereza forces the wife to bathe.

The cast is uniformly strong, even Fournier, who was charged with having to replace the shows original philosopher days before opening. Fourniers predecessor was a man, yet the gender-reverse casting seems so in keeping with the plays feminist, paradigm-questioning spirit I wouldnt have given Fourniers casting a second thought had I not known of its cause.

The standouts, however, are easily Armour-Ostroff, whose discipline, anxiety and deadpan humour keep the story grounded in the real, and Hunter, upon whose wiry frame the plays bold central conceit rests.

The wifes animalistic fugue isnt suggested its embodied, fully and precisely, and is never entirely absent even after shes upright, speaking in complete sentences, and poised to accompany her husband on his journey to usher in an age of reason.

The rest of the Empire trilogy will open in the coming months. Id guess each show will work fine as stand-alone pieces, but youd be wise to get in on the ground floor of this ambitious new experiment in independent serial narrative.