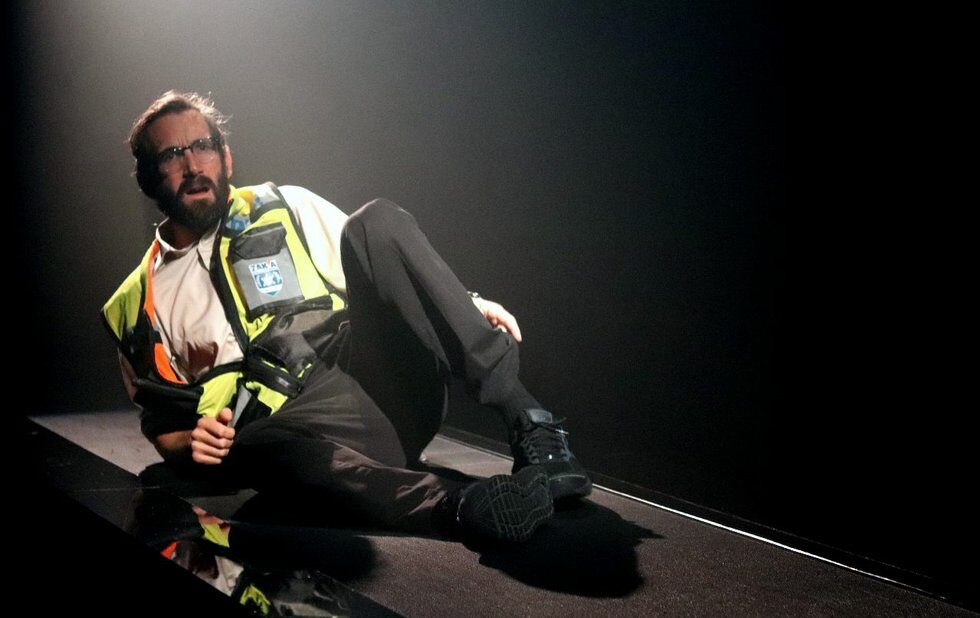 The Runner begins in media res, with hard, white, narrow light illuminating Jacob as he traipses the treadmill upon which hes confined for the duration of this riveting new one-person play. Jacob volunteers for ZAKA, the Israeli rescue and recovery unit charged with responding to any terror attack, accident or disaster.

An adherent of the Hippocratic oath, Jacob doesnt distinguish between Arabs and Jews when assessing triage, but the fact that he saves the life of a Palestinian suicide bomber is viewed with hostility by his superiors. Over the course of The Runner, Jacobs harried mind will slide between this contentious rescue, his attempt to find relief in a Tel Aviv nightclub, various alienating encounters with relatives and associates and memories of unearthing a mass grave in Ukraine.

Written by Christopher Morris and directed by Daniel Brooks, The Runner conveys the vagaries of trauma with propulsive urgency. The plays shifts in tempo and desperation are signalled by shifts in the velocity of the treadmill, the sole item in Gillian Gallows starkly brilliant set design.

That treadmill is a noir catwalk, an existential high-wire from which Jacob seems bound to tumble. Jacob constantly moves toward us without ever reaching us always under threat of receding into the shadows, hes running just to stay in one place. Even the sound of the treadmill, a sort of slithering drone, is unnerving, building anxiety as it accelerates. Bonnie Beechers lighting design is similarly skeletal, generating its chilling effects from no more than one or two sources at any given time.

Rand, who accompanied Morris on a recent research mission to Israel, navigates Jacobs purgatorial trek with arresting immediacy, responding to each discovery with fresh astonishment, while never losing the thread of dread that weaves through his path. As a ZAKA and a Jew, Jacob is devoted to maintaining the integrity of every body he oversees, every piece of skin, every drop of blood.

The terror of The Runner, however, is derived from the sense that nothing is immune to splintering into fragments not the victims of violence, nor the fraught state of Israel, nor the beleaguered psyche of this noble man charged with attending to the remains of harrowing acts of savagery.