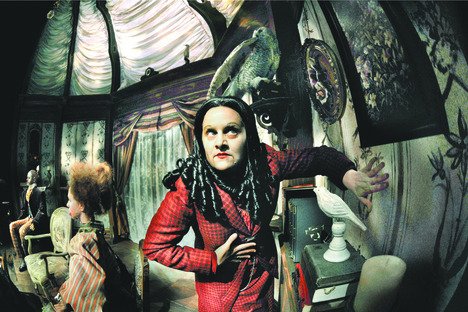 Nathalie Claudes Salon goes on... and on.

There’s something fascinating about The Salon Automaton, Nathalie Claude’s clever blend of human and non-human actors, but not enough dramatic variety to sustain its nearly two hours.[rssbreak]

Claude plays the hostess of a weekly salon whose three guests, all mechanical figures, include a poet, a cabaret performer and a patroness, voiced, respectively, by Clinton Walker, Moynan King and Leni Parker.

The hostess reveals a secret near the play’s end, one that explains the nature of her guests and the reason for the salon. Until then, we’re given an intentionally formal script that plays with philosophical notions of humanity and immortality.

The three guests are a treat to watch, thanks to mouth, eye, head and arm movements created by automaton programmer Simon Laroche and designer Raymond Marius Boucher.

Only later do we realize that the hostess herself has a mechanical quality, even wearing an enamel-like makeup similar to that of her guests.

But the play carries us only so far. Just as the automatons have limited physical movement, their conversation is similarly constrained when they’re with the hostess. Only when a character accidentally mentions a forbidden topic do they depart from ordinary drawing-room conversation.

But such occurrences happen too rarely in a show that would benefit from cutting. Only at the midpoint is the real drama is switched on, when the automatons are alone onstage.