The Seat Next To The King mixes race, politics and forbidden sexuality 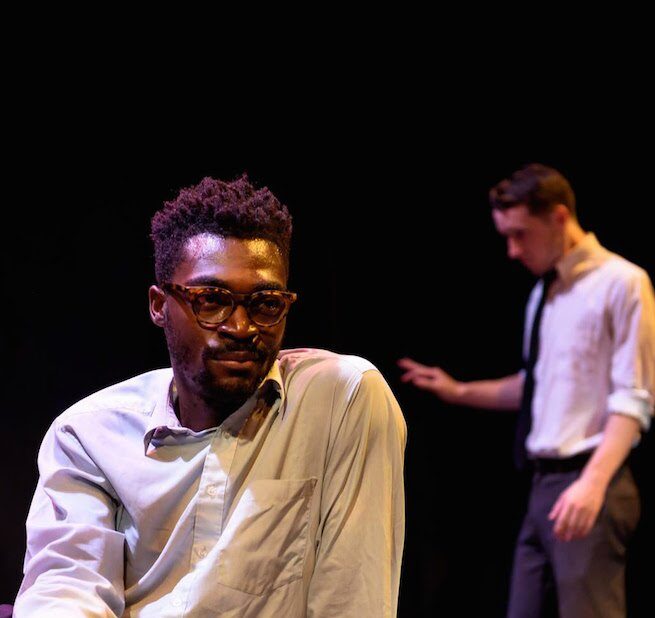 THE SEAT NEXT TO THE KING by Steven Elliott Jackson (Minmar Gaslight). At the Theatre Centre (1115 Queen West). Runs to October 1. $22-$29. theatrecentre.org. Rating: NNNN

A white man and a Black man walk into a public restroom. It’s not the start of a joke, because in 1964 in Washington, DC, it’s the type of clandestine meeting that can ruin your life.

That’s how The Seat Next To The King begins, a taut encounter between two men trying to find room for desire in a world that pushes them to the fringes. We watch them drawn together by a force more powerful than the many barriers – race, politics, acceptance of their own sexuality – that set them apart.

Their navigation of this attraction is one of the play’s biggest through lines, and one capably walked by its two young leads. Kwaku Okyere’s Bayard Rustin wilfully inhabits his own skin because its colour has already made him a target. Conor Ling’s Walter Jenkins hides even from himself, horrified by his irreconcilable carnal urges.

Both characters are based on real men. Rustin was a civil rights advocate for Martin Luther King, Jr. and Jenkins served as a top aide to President Johnson, and seats next to these kings brought them opportunity but also scrutiny. Arrests for “lewd conduct” kept Rustin off the main stage of the civil rights movement he championed, while Jenkins was eventually forced to resign.

They’re imagined here through performances that are not only technically impressive but full of the immense conflict that makes the play so watchable. Each is on an agonizing quest for pleasure. Each wants to be seen but resents the way he’s perceived. Okyere and Ling play out this human story’s messy contradictions with a hard-earned, palpable chemistry that deserves serious acclaim.

It’s the tension that makes the piece so powerful, and director Tanisha Taitt always knows where to locate a source of energy, be it eroticism, fear or near-constant frustration. It’s all there at just the right moment.

Steven Elliott Jackson’s script is raw and real, though its epilogue vocalizes things that the play has already made clear. Still, the bulk of it smoulders with a slick instinct and thematic variations that make its issues as painfully relevant today as they would have been in the 60s.

At one point, Bayard explains that his vision of equality wasn’t understood by his fellow activists. His explanation says a mouthful.