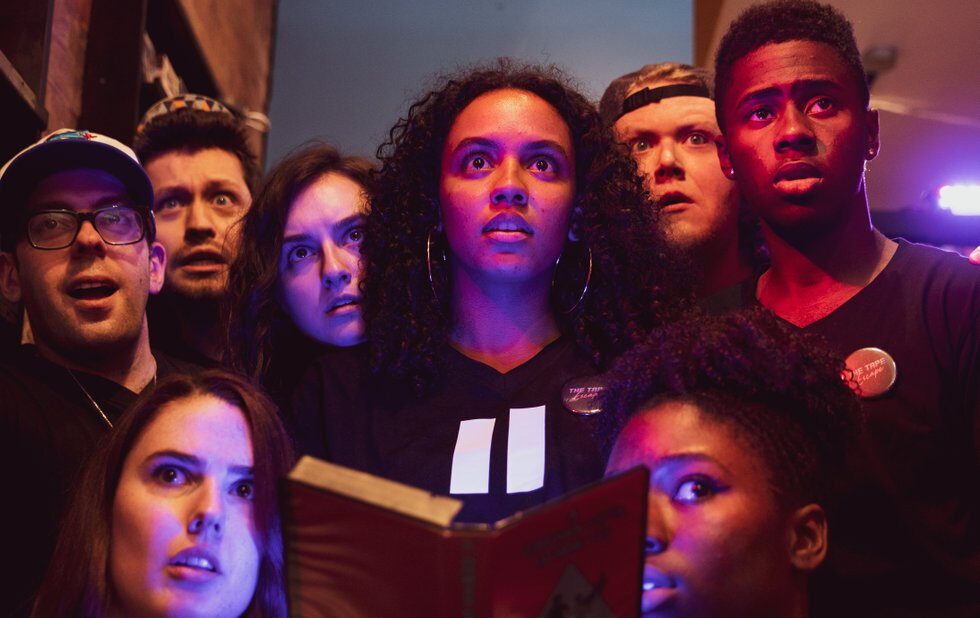 THE TAPE ESCAPE by Vanessa Smythe, Mitchell Cushman and Nick Bottomley (Outside the March). At Queen Video (480 Bloor West). Three shows run in rep to August 24. $31.95 each. outsidethemarch.ca. Rating: NNNN

It’s hard to review Outside the March’s latest site-specific marvel without giving too much away.

The Tape Escape consists of three escape room experiences set in the early 90s and performed, appropriately enough, in the former Queen Video on Bloor West, hundreds of VHS tapes lining its shelves. By their very nature, escape rooms (which I haven’t done before) are immersive experiences, relying on puzzles that need to be solved, leading to other puzzles, until, clock ticking, you reach the finale.

OtM is obviously interested in delivering more than mere games, however. And so all its experiences have deeper themes and concerns.

The overall arc of A Grown-Up’s Guide To Flying deals with the eighth birthday of Gene, a girl with a degenerative eye illness. It uses (no spoiler here) the story of Peter Pan as a touchstone, and its puzzles and clues are all thematically related.

I had great fun with this one, although I’m not sure whether it was because the clues were so inventive or whether it was the presence of ace improviser (and obvious escape room aficionado) Liz Johnston on my team of four.

The finale was enchanting, a true feast for the senses.

My second escape room experience was Love Without Late Fees, and the arc for this one was fascinating, even if the puzzles were less intriguing. The narrative involved a couple (played in video clips by Vanessa Smythe and Sébastien Heins) who meet through a clever video dating service and embark on a relationship. How you progress through the puzzles determines their fate. (Apparently there are 32 different outcomes.)

The challenges for this one were shorter, the clues leading to various movies the couple liked. My team – most of us introverted critic types – needed extra clues to solve things. And we experienced some technical blips that essentially pushed the pause button on any momentum.

Organizing The Tape Escape – Smythe, Mitchell Cushman and Nick Bottomley are credited as co-creators – must have been complicated. Three shows are happening simultaneously (the one I didn’t experience is called Yesterday’s Heroes), and while playing you can hear (and often see) different groups playing out their games. Plus, amusing interstitial vignettes involving the store’s “clerks” bookend each show.

Production designers Anahita Dehbonehie and Nick Blais, who were both present on the night I attended, Blais at one point running through the store to adjust a light, deserve special mention. The design elements, from the moveable, tape-laden shelves and game consoles in the front area (you can play!) to the intricately detailed clues throughout the space (even the basement), add up to a filmic funhouse.

Unless you’re used to escape rooms, you might want to spread your Tape Escapes over several days. I found bingeing two experiences exhausting, although it didn’t help that I did them smack in the middle of the Fringe.