The top 10 Toronto theatre productions of 2018

Sure, there was lots of behind-the-scenes drama this year at Soulpepper, Buddies and Luminato. But none of that upstaged the. 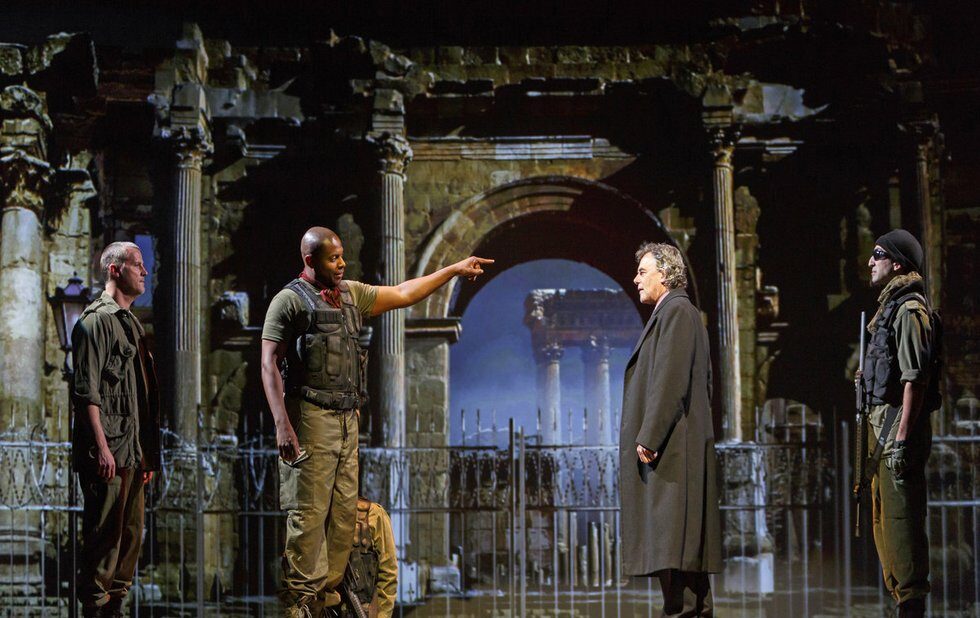 Sure, there was lots of behind-the-scenes drama this year at Soulpepper, Buddies and Luminato. But none of that upstaged the powerful work at the theatres themselves. Hopefully, the discussions and changes from this eventful year will make the scene even more exciting in 2019.

Duncan Macmillan‘s interactive play about depression, suicide and trying to identify the things that make life worth living was itself – especially in Brendan Healy‘s immersive production and Kristen Thomson‘s warm, generous performance – an affirmation of the power and immediacy of live theatre.

Robert Lepage used brilliant film and stage techniques to bring clarity and a brisk urgency to Shakespeare‘s late Roman tragedy. The dazzling production provided a marvellous backdrop for fully-realized performances by Andre Sills, Graham Abbey, Lucy Peacock and others who, guided by Lepage, made us feel like we were watching an essential play in the Bard’s canon.

A middle-aged cartoonist (Laura Condlln) tries to understand why her father (Evan Buliung) killed himself and so revisits her past, including her younger selves (Sara Farb, Hannah Levinson), shedding light on years of secrets. This stunning adaptation of Alison Bechdel‘s graphic novel memoir proved that musicals can be as rich and complex as the most profound dramas.

The Howland Company/Crows Theatre, October 9 to 27

Political activism meets magic realism in Matthew MacKenzie‘s dark comedy about an Indigenous tar sands worker (a vital Sheldon Elter) suspected in a workplace incident who flees from the scene and interacts with various creatures – including one intimate encounter with a Mama Bear. Earthy, fast-paced and beautifully suggestive theatre. Note: Bears returns to the Factory Theatre, February 28 to March 17.

Soulpepper, May 4 to June 2

The Howland Company, March 29 to April 14

Going in, I’m glad I didnt know much about Simon Stephens‘s explosive drama set in a British high school (or read the spoilery headlines on many of my colleagues’ reviews). This British Breakfast Club transcended its topical issues with rich, subtle writing about power dynamics and identity, with director Gregory Prest getting nuanced work from his convincing ensemble.

Singing Swan, with support from Theatre Passe Muraille and Wylie Pig, January 17 to February 11 and October 4 to 21

Samuel Beckett‘s monologue about memory, aging and thwarted ambitions became, in Mac Fyfe‘s burnished production, a fitting tribute both to Theatre Passe Muraille, celebrating its 50th anniversary, and actor Bob Nasmith, one of the company’s original artists. Nasmith nailed his character’s slapstick moments, but it was the image of him staring into space and listening to his younger self that will haunt me for years.

When Jasp (Amy Lee) prepares for her wedding, Morro (Heather Marie Annis) feels left out in this latest installment of the ongoing saga of the clown siblings’ lives. While the show took hilarious shots at everything bridal – from TV shows to bachelorette parties to a certain Royal wedding – the pair and director Byron Laviolette understood that the heightened emotional stakes deepened the laughs.

40 DAYS AND 40 NIGHTS It felt that long watching this smarmy show about lovers sharing their profound love with us after a consciousness-raising trip to India.

SCHOOL OF ROCK needed to learn that we were there to see the kids, not misogynist man-boys.

CHARLIE AND THE CHOCOLATE FACTORY cranked out scenes of horrific violence instead of pure imagination.