An electric Streetcar Named Desire, an immersive Flick and a thoughtful School Girls top our list of the year's best plays and musicals 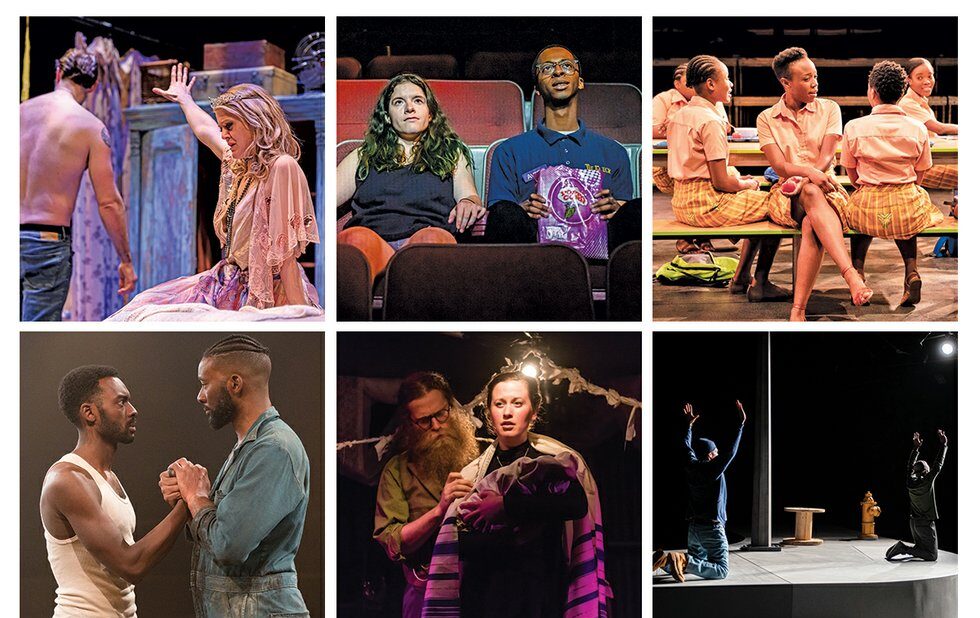 Most of these shows were either written or directed by women – or both. So is it any coincidence that this was one of the boldest and most exciting theatre years in recent memory? Heading into a new decade with a couple of the women on this list at the helm of local theatre companies, the future looks promising.

In addition to restoring the reputation of Soulpepper Theatre after its biggest crisis, the company’s new artistic director Weyni Mengesha helmed this game-changing production of one of the world’s best-known plays, making us see, feel and hear new things in the script: exactly what revivals are all about. Amy Rutherford, Mac Fyfe and a diverse supporting cast of actors and musicians made this play about sex and secrets throb with vitality.

2. The Flick (October 6 to November 2, Outside the March/Crow’s Theatre)

Annie Baker’s intimate epic about the underpaid employees of a small-town movie theatre became, in Mitchell Cushman’s hands, a funny, poignant look at class, economic privilege and the changing of one type of life for another. Against Nick Blais’s hyper realistic replica of a movie house, the actors (Amy Keating, Durae McFarlane and Colin Doyle) got us involved in their ordinary lives in a way that felt truer than the artifice we often see on the big screen. Unforgettable.

3. School Girls Or, The African Mean Girls Play (March 5 to 24, Obsidian in association with Nightwood Theatre)

Nina Lee Aquino’s production of Jocelyn Bioh’s play about students in an exclusive Ghanaian boarding school in the 1980s was so smart, funny and moving, I stayed for the talkback session – something I seldom do. But the more time spent in the company of gifted actors like Akosua Amo-Adem, Natasha Mumba, Tatyana Mitchell and Bria McLaughlin, the better. Seeing them spark off each other was, to quote the Whitney Houston song belted out in the show, the greatest love of all. 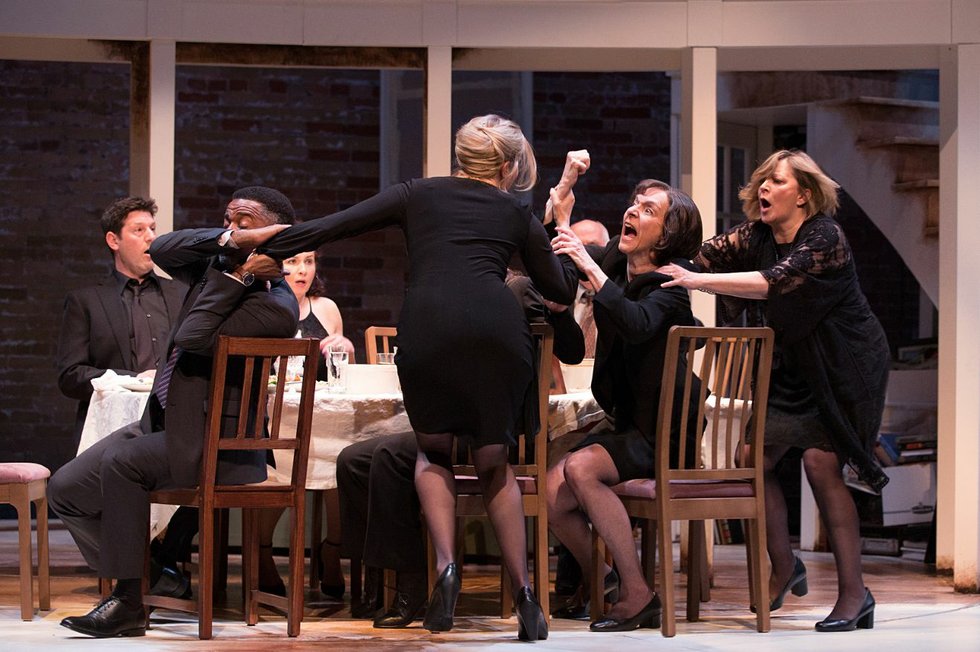 Alcoholism. Suicide. Incest. Drug addiction. In Jackie Maxwell’s hands, this excoriating production of Tracy Letts’s Pulitzer Prize-winner resonated even more with the fucked up times than it did when the play premiered over a decade ago. The dysfunctional Weston clan convene at the Oklahoma homestead of a dead professor, and the man’s dying wife and one of his headstrong daughters (Nancy Palk and Maev Beaty) battle it out for supremacy. Seldom has catharsis been so needed – and so entertaining.

The personal met the political in Hannah Moscovitch, Ben Caplan and Christian Barry’s raucous, life-affirming musical inspired by the lives of Moscovitch’s paternal great-grandparents. Between poignant vignettes about Chaim and Chaya Moscovitch’s journey from Romania, the exuberant, over-the-top Caplan morphed into a sly emcee character who tied the Barry-directed production together and made us seriously think about the refugee crisis today. The show returns to the Tarragon in June.

Even if Drake hadn’t shown up on opening night to support his former Degrassi castmate Mazin Elsadig, this show would have been newsworthy. Drawing on African myths and rituals, Mumbi Tindyebwa Otu’s production of Tarrell Alvin McCraney’s poetic drama about two Southern brothers (Elsadig and Daren A. Herbert) and one of their prison friends (Marcel Stewart) trying to escape from their trapped lives was full of the kind of powerful metaphors and heartstopping drama that only exist in live theatre.

7. Prophecy Fog (May 14 to 26, Paper Canoe Projects/Theatre Centre, in association with Nightswimming)

If you had told me a year ago that I’d be mesmerized watching Jani Lauzon curl up with stones and talk to and listen to them, I wouldn’t have believed you. But her solo show – enhanced by Franco Boni’s direction and Melissa Joakim’s environmental design – was as unique and eclectic as the artist herself. Telling stories about her life – especially her relationship with her daughter – and touching on the mythology around Giant Rock in the Mojave Desert, Lauzon and her hundreds of rocks and pebbles got us unforgettably stoned.

Lots of recent art has dealt with the issue of police violence against Black men. But few works have done it with as much harrowing precision as Antoinette Nwandu’s play, which draws on Beckett’s Waiting For Godot to explore the absurdity of racial tensions. Philip Akin’s direction – his last as artistic director of Obsidian – and layered performances by Kaleb Alexander, Mazin Elsadig and Alex McCooeye made this riveting theatre. And I’m still wondering how they pulled off that picnic basket scene. 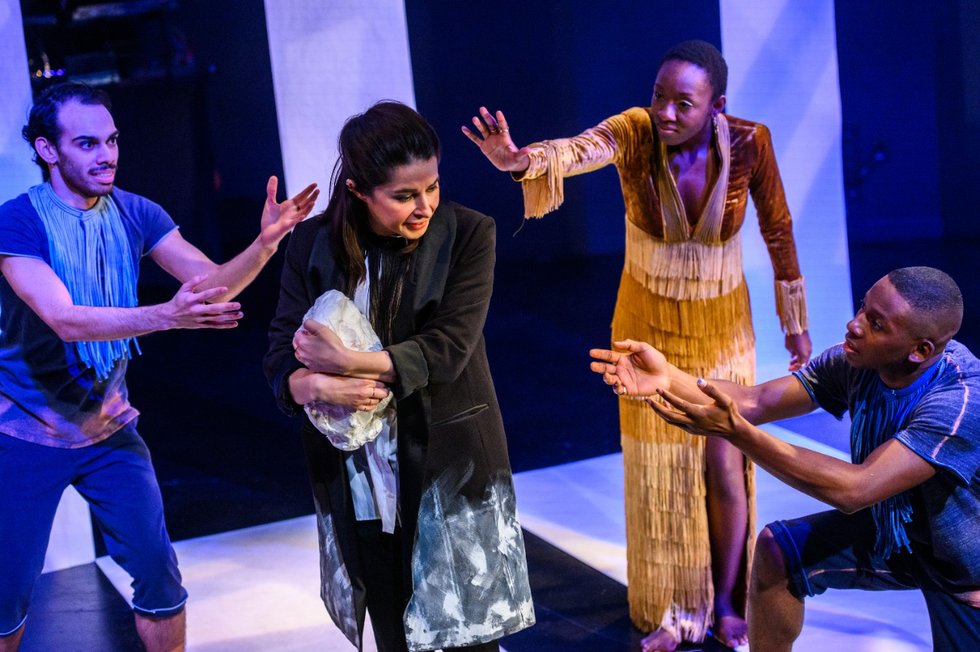 9. Iphigenia And The Furies (On Taurian Land) (January 6 to 20, Saga Collectif)

How often does a play leave you wanting more, not less? That’s what happened with Ho Ka Kei’s cheeky and coolly contemporary take on Euripides’ classic about the exiled princess (an assured Virgilia Griffith) who, living in Tauris as a priestess, is tasked with killing strangers – including her brother Orestes (Thomas Olajide). Jonathan Seinen’s diverse cast, clad in Christine Urquhart’s suggestive costumes, added layers of complexity to this play about cyclical violence and, in Ho’s version, colonial destruction.

10. The Ex-Boyfriend Yard Sale (February 5 to 10, the red light district/Progress Festival/Outside the March)

Can you put a price tag on items associated with an ex-lover? That was the amusing premise of Haley McGee’s brilliant solo show, which included a display of things from former boyfriends and complex mathematical formulae about what those items should be worth based on factors like who broke up with whom, how long they were together and who suffered more. Directed with Rube Goldberg-like precision by Mitchell Cushman, the always watchable McGee was heartbreakingly honest in her exploration of the toll love has taken on her. Pay whatever it takes to see the Soulpepper remount in May.

No matter how vivid and realistic-looking, video shouldn’t be used to compensate for the lack of a set.

From Sting (The Last Ship) and Bob Dylan (The Girl From The North Country) to the Ramones (Four Chords And A Gun) and Pink Floyd (Another Brick In The Wall), some of the year’s worst music-based shows were inspired by the songs of old white guys. Mix it up, will ya?