Theatre Gargantua’s The Wager is unconvincing

Multidisciplinary show about belief and misinformation is full of impressive visuals and rigorous performances, but lacks substance 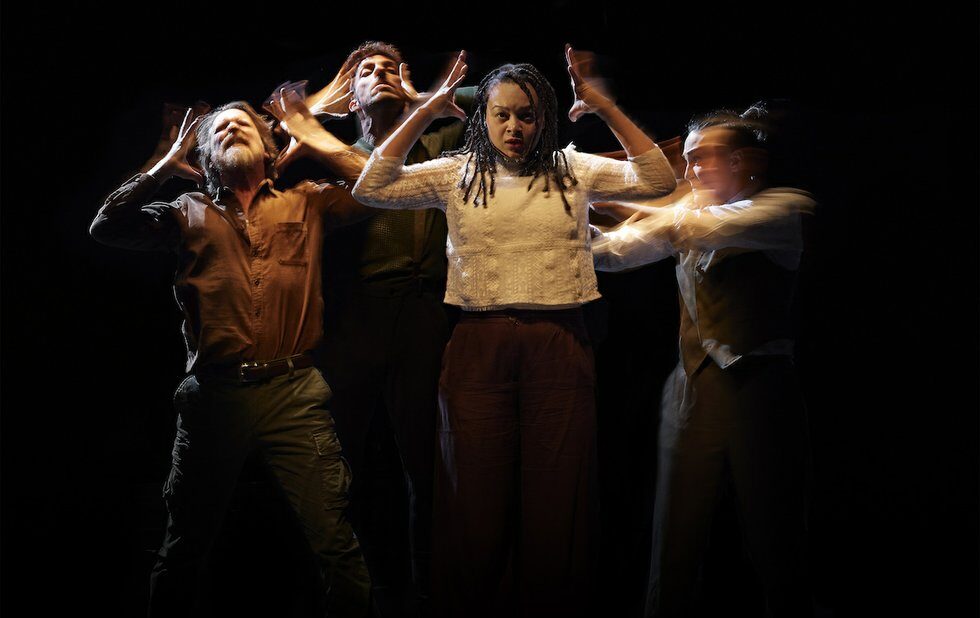 Between the Trump impeachment hearings and Facebook and YouTube facing political pressure to curb misinformation, Theatre Gargantua’s gonzo exploration into belief couldn’t be more zeitgeisty. Politicians and tech companies seem to have little interest in empirical truth or the rule of law, and the consequences for humanity are dire.

Unfortunately, this relentlessly paced and performed show is less interested in grappling with the political and economic conditions that allow conspiracy theories and fake news to thrive than using pithy and abstract philosophical arguments to suggest the spread of misinformation can be boiled down to human nature. As one character puts it, “We are all a bunch of believing machines.”

Written by Michael Gordon Spence and directed by Jacquie P.A. Thomas, The Wager takes its title from Alfred Russel Wallace (François Macdonald), a 19th-century scientist who accepted a wager from flat-earther John Hampden (Spence) intent on disproving research showing that the earth is spherical. Though Wallace won the bet, his opponent refused to accept the result. This allegorical story provides the basis for a series of vignettes that are deft showcases for the multitalented cast but offer little substance.

The show opens with Teiya Kasahara looping vocals on small raised platform painted with the flat earth map. They are joined by Spence, Olivia Croft and Macdonald who pick up instruments and join in a musical number. From there, the show vacillates between snappy pontifications on belief and character-driven scenes that are sometimes comic, sometimes serious.

Over 70 minutes, we get a mix of live music, character comedy, original musical numbers (created by the cast and sound designer Thomas Ryder Payne), rhythmic movement routines involving ladders, video projections and lighting design (by Laird Macdonald) that emphasizes negative space by framing the action with large swathes of shadow.

Each section is introduced by a chapter heading on a rectangular video screen above the stage. There’s a game show, a pair of birds who blindly worship an “almighty gourd,” a recreation of the titular wager and bits on climate change deniers and celebrity anti-vaxxers. A scene featuring Croft about believing women who report sexual assault affectingly conveys what it means to be believed, but feels disconnected from the rest of the show.

Theatre Gargantua is known for layered, multidisciplinary productions – this one was two years in the making – and the intensity with which the actors interact with the multimedia elements is rigorous and impressive. Each is given long tracts of verbose dialogue but are also required to sing (Kasahara’s powerful soprano handily fills Passe Muraille’s mainspace), play instruments and do physical comedy.

But the cast’s energy can’t hide that Spence’s script is mostly just looping around one thin metaphor. Each new scenario feels more like an excuse for arresting mise en scène than a chance to unpack the decidedly non-random social forces propelling people to disregard science (namely disenfranchisement and disempowerment). The Wager takes a gamble on mashing up cheeky caricature and plaintive philosophy, and the result is unconvincing.