The Youth/Elders Project is revolutionary theatre 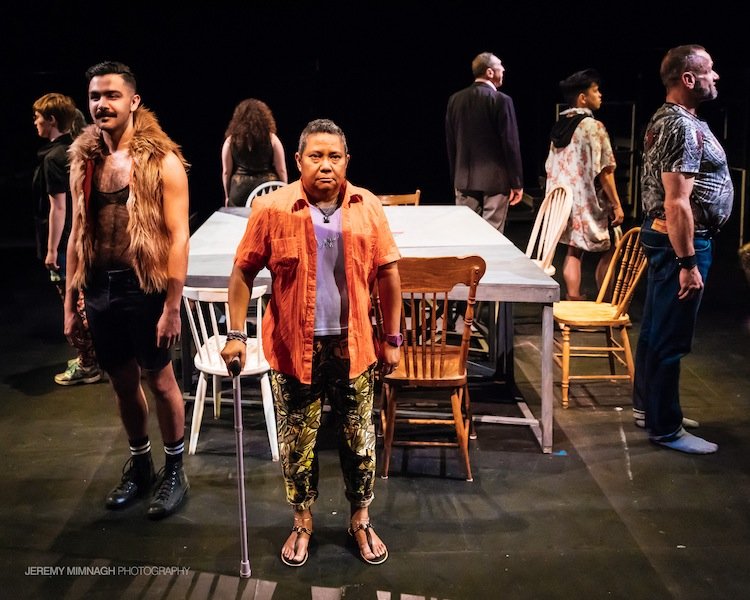 I cant think of a better way to kick off Pride month than by seeing The Youth/Elders Project, a remarkable work collectively created and performed by youths (late teens to mid-20s) and elders (mid-50s and up).

While technology has made it easier than ever for queers to connect, you seldom see people of different generations mix. Strangely, we all tend to stick within our same age and socioeconomic groups.

Which underlines the importance of this piece both to the performers, who got to know each other over a year of workshops, structured games and interviews, and the audience, who gets to see these meetings and stories played out with honesty and lots of theatrical innovation.

Directed by Buddies in Bad Times artistic director Evalyn Parry, with Vanessa Dunn and Leelee Davis, the show is clearly meant to be educational and a bit of a social experiment. But while it informs, it also entertains.

The group finds novel ways of presenting the material. Sometimes, one performer will play another for instance, early on we see (and hear, via audio) LeZlie Lee Kam, a 50-something, differently abled woman who calls herself a brown, Trini, callalloo DYKE, and then the younger Daniel Carter, who wears a fur vest, see-through mesh top, black shorts and army boots, takes over her story.

The result evokes a sense of shared history, and it also prevents any story from sounding overly earnest and confessional. While we watch the person telling the story, were also looking at the person whose story is being told.

This is especially poignant in the case of Brian Cope, a tall, proud looking senior who was married and raised two children before coming out. As we watch a sequence in which a younger man playing him phones a Gay Fathers counselling service, clearly terrified, we see Cope, alone, with a phone on the table in front of him. The effect is devastating.

Because of their years and the experiences they had coming to terms with their various upbringings (religious, cultural), the older performers have experienced bigger shifts in their lives, and their stories have a dramatic heft. Its hard not to be shocked by Kams story about trying to find a sense of community in the 70s in a house that police would frequently raid thinking there were pedophiles inside.

But the younger people have experienced their own set of issues, too, that are no less urgent.

Riley Kelk sings a delightfully satiric song about changing perceptions around gender and pronouns. The Mexican-born queer artist Monica Garrido, whos got charisma to burn and impeccable comic timing, has a poignant story about why shes glad she no longer lives in Mexico and has to be afraid all the time of hiding stuff in her room from her mom.

And the fiercely confident Jordan Campbell performs a sequence riffing on the LGBTQ acronym that begins as something weve all seen and heard but then morphs into a delightful, subversive and completely surprising bit of performance art.

Some of the most moving parts involve people from different generations finding a common bond, such as when the refreshingly forthright Neila Lem, talking to Kelk, discovers the idea of non-binary gender, or when Indigenous artist and scholar Lila Pine discovers an ally in the younger Ty Sloane, whos Ojibwe, Irish and Asian.

And two of the most effective sequences involve well-known pop songs. I wont spoil the effects, but Parry and company show what can be done without dialogue but with simple, clear dramatic staging and metaphor.

The productions intriguing final third sees the ensemble sitting down at a long table to discuss topics chosen at random. Only half a dozen people can be seated at any time, so the discussion can shift and change according to who decides to talk. On the night I attended, topics included relationships and the challenges facing people of colour.

The staging of this scene Helen Yung is the show’s production designer symbolizes the group coming together to share their experiences. The long table itself is formed from sections that have been used in earlier episodes.

In a similar way, even the way the audience is seated on either side of a rectangular playing area, much like at a tennis match is significant. While it sometimes means sound can be compromised, especially when a performers back is turned to you (and these aren’t all trained performers, remember), it also means you can look across at the other half of the crowd to see a full range of ages and colours in the audience. That must be intentional.

I hope this show returns the run is too short and gets to tour the country. Queers and allies throughout the nation deserve to see and experience these essential stories.