NOW MagazineCultureTheatreTheory brings fascinating, if melodramatic, notes to this play about freedom of speech

Theory brings fascinating, if melodramatic, notes to this play about freedom of speech 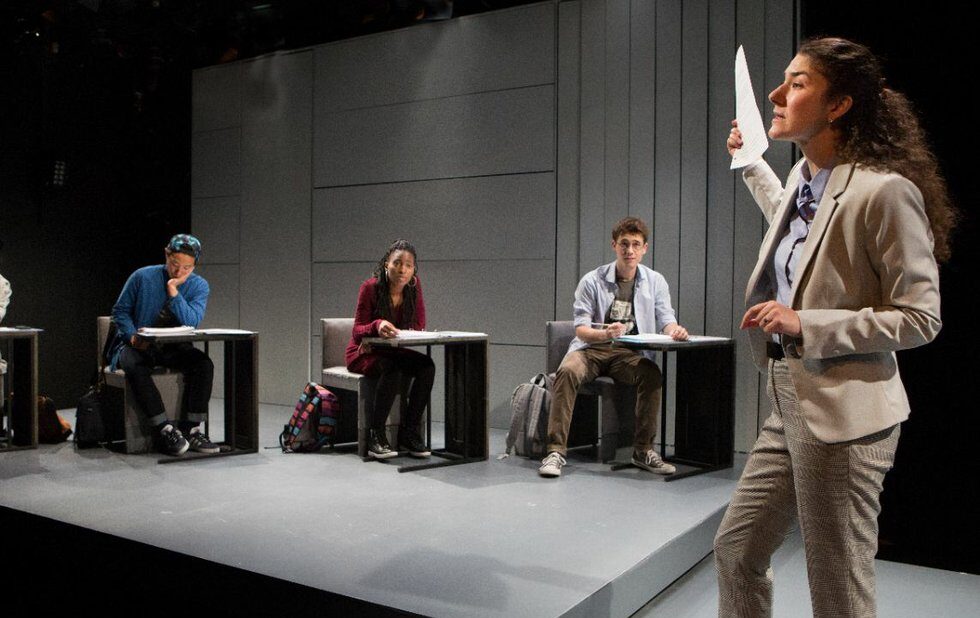 Norman Yeung takes on a bit too much in Theory, a combination of academia critique, statement about millennials and exploration of the repercussions of free speech. Oh, and its a thriller/mystery to boot.

The premise is intriguing. Young tenure-track professor Isabelle (Sascha Cole) is determined that her film theory class be unlike others. Besides purging her syllabus of the works of many dead white male directors, shes letting her diverse students (Bilal Baig, Asha James, Kyle Orzech and Anthony Perpuse) voice their opinions anonymously on an unmoderated, uncensored online message board.

Thats fine to reference the title in theory, but what about in practice? Soon the board is being overrun by offensive anonymous comments that test Isabelles limits. How progressive will she can she be?

Things are complicated by the fact that one poster is invading Isabelles personal life, including her relationship with her wife, a tenured Black professor and novelist named Lee (Audrey Dwyer).

Not to spoil anything, but its interesting to see if, how and why Isabelle changes her mind over the message board. The play gains in complexity the further it goes along. Theres also the question of whos doing the posting, which makes the latter part of the play, rather jarringly, into a thriller.

Unfortunately, the characters suffer because of the over-reliance on plot. The four students dont establish much personality in the opening scenes. And Isabelle and Lees relationship lacks authenticity and spontaneity. (Yeung tells us in the program that four years after his first draft of the play he changed the gender of Isabelles spouse.)

I wish there were more about Isabelles background and how she got to the fearless political place shes at. The best scene is between her and her department head, Owen (Fabrizio Filippo), whos learned how to play the academia game and not stir things up with his entitled students. Each word in their exchange bristles with tension if only the rest of the play had been as exciting.

Still, Coles performance is layered and grounded as she goes from a confident, brilliant teacher to someone shaking in fear and uncertainty.

Esther Juns direction is as sleek and efficient as Joe Pagnans monochromatic set, which includes desks, cabinets and blinds that open up to reveal bits of info. Cameron Daviss projections of message board exchanges and emails are especially effective, at times blanketing the set in an anxious frenzy. And Michelle Bohns spot-on costumes help show how characters perceive themselves in the academic hierarchy.

Theory gets more than a passing grade, but it could have achieved much more.