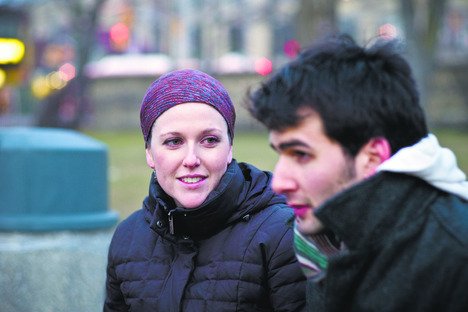 The warm rapport between real-life couple Amber Mills and Michael Rode will stay with you.

Adam Pettle’s 1997 play Therac 25, set in the cancer ward of Toronto’s Princess Margaret Hospital, is both funny and hard-hitting. The action focuses on two patients – both receiving chemotherapy treatments – and the important role non-experts play in therapy.[rssbreak]

University student Moira (Amber Mills) has a bad prognosis when she meets Alan (Michael Rode), a lovable weirdo whose gruff, Cookie Monster voice is the result of vocal cord surgery. The two soon discover a rapport that blossoms into a strange friendship.

Under Hume Baugh’s direction, Mills presents Moira as not just another broken denizen of the medical system but as someone with moxie, a sense of humour and an adventurous streak. Rode is hampered by having to maintain the gravelliness in his voice, which sometimes becomes cartoonish in emotional moments.

Both actors convincingly convey the sexual tension that arises between them. (They’re married in real life.)

The rough sound design needs work, and the set and costumes could have played up the kitsch value of the early 90s setting even more.

But the show, even at a too-brief 40 minutes, resonates and stays with you.