NOW MagazineCultureTheatreThis Christmas Carol is too cut down

This Christmas Carol is too cut down 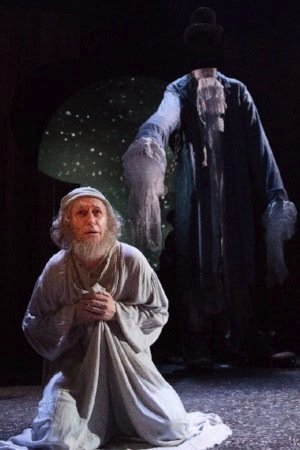 Its fitting that the Shaw Festival mount Charles Dickenss seasonal classic at this time of year. Niagara-on-the-Lake, with its quaint shops and old-time air, not to mention the Victorian music hall feel of the Royal George Theatre itself, provide an atmospheric backdrop for the tale of a miserable misers spiritual reawakening one Christmas Eve.

Tim Carrolls production, lets just say from the start, is stunning. Christine Lohres set is inspired by an Advent Calendar, with little doors that open up to provide some nifty visual surprises throughout the show.

Moreover, theres some imaginative use of puppets and shadow to illustrate Ebenezer Scrooges (Michael Therriault) past. Props are kept to a minimum (during party scenes, hats double as platters for food and drink). And the billowy, huge presence of the Ghost of Christmas Yet to Come is both chilling and impressive.

My problem with this production is how much has been cut from the novella. Scrooge barely mutters a bah humbug before hes in bed and encountering his visitors. The book is so well written that words, phrases and images occur in the prose that pop up later with a deepening effect.

By losing much of the writing, this play feels like a sped-up, Coles Notes version of the story.

Which is a shame, because Therriault, cast younger than most theatrical Scrooges, makes a suitably gruff and mean lead, his voice pinched and ragged. (A nice touch: listen to his repeated refrain while he sleeps.)

Other standouts in the cast include Jonathan Tan, a clear-voiced, cheerful Fred (Scrooges nephew), Patty Jamieson as Scrooges maid, Mrs. Dilber, who also doubles as a characterful piece of furniture, and Graeme Somerville, who adds gravitas in various roles, including a shunned man seeking donations to the poor.

Another issue I have is just how literally Carroll takes the title. There are at least six Christmas carols sung during the show, many invoking Christ our Lord. Were asked to sing along through every bar.

Yes, tis the season and all, but it seems a rather odd and non-inclusive thing to do in 2017. Or maybe Im just being a Scrooge myself.