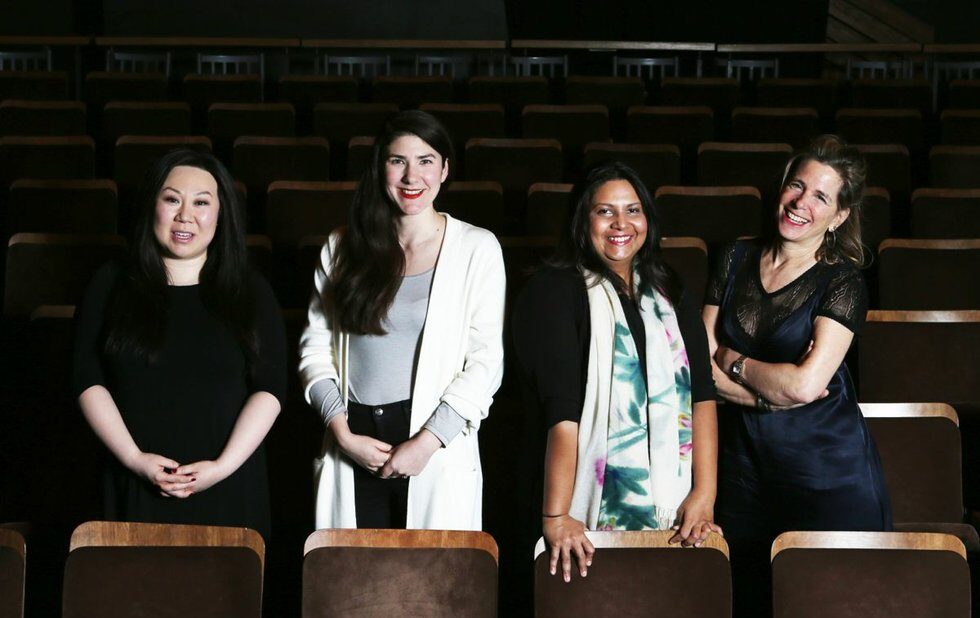 Lisa Li (left), Sascha Cole, Tania Senewiratne and Leslie Lester work behind the scenes of that show you're seeing.

She’s referring in particular to a group of up-and-coming producers – all women – working in the company whom she’s helped mentor in this essential yet often unsung role.

Together they’re a big part of the organizational power driving Soulpepper’s ambitious summer project. The company is relocating to New York City for the month of July, where, at the Pershing Square Signature Center on 42nd Street, they hope to impress American audiences with Toronto faves like Kim’s Convenience, Spoon River and A Brimful of Asha.

As if that weren’t enough of a logistical challenge, they’ll also mount a full slate of shows here at the Young Centre, including Canada-150-friendly instalments of VideoCabaret’s celebrated history series.

“People ask me all the time, ‘What do producers do anyway?'” says Lester. “What do I do?! More like what don’t I do.”

“Producers do a little bit of everything,” adds Tania Senewiratne, Soulpepper’s general manager, who honed her chops in NYC assisting producers on and off Broadway.

In theatre, producers oversee many financial and managerial aspects – everything from balancing budgets and negotiating talent contracts with agents to setting rehearsal and performance schedules – and that’s

when things are going smoothly, which in real life is hardly ever the case.

“There will always be problems, and that’s what producing is – fixing problems,” explains Lisa Li, a producer with Soulpepper who produced independently before starting at the company as an intern.

“I learned that fixing problems and putting out fires isn’t an indicator that you’ve done something wrong – it’s part of the job. It’s up to me to come up with and implement the best solutions. Producing is really just creative troubleshooting.”

Rounding out the group is Sascha Cole, a member of Soulpepper Academy’s producing stream who still acts and produces regularly in the indie scene.

“One of the first things Leslie taught me was to approach problems or hurdles with a ‘yes.’ I’ve learned to keep that word in my brain when challenges come up.”

But being the left-brainers in a creative field also means making difficult decisions.

“Sometimes you have to be the adult in the room,” notes Senewiratne. “You have to be the person who looks at the bigger picture and sometimes says no. We’re all here because we love theatre, but we’re the ones who also have to be about the business of doing theatre, and that means making hard phone calls or having tough conversations.”

Each producer took a different path to the position, but they all agree that mentorship, formal and informal, has been key to their success. At Soulpepper, this is a core principle enshrined in the Academy and in the company’s organization-wide open-door workplace policy.

“I went to school thinking I wanted to be an actor and came out wanting to be a director,” says Lester, who got her start producing with Deanne Taylor at VideoCabaret before moving to Nightwood Theatre and then landing at Soulpepper for its third season back in 2001.

“I quickly self-identified that I wasn’t going to be a director. I was working steadily as a stage manager when someone who hired me recognized my initiative-taking (otherwise known as being really bossy) and said, ‘You should be a producer.'”

Senewiratne, on the other hand, says she didn’t come from the rehearsal hall, and hasn’t acted a day in her life. She started out studying directing at Ryerson, where she also now teaches producing. After a decade in New York working her way up to assisting famed Broadway producer Tom Viertel, she recalls an informal mentorship arrangement with Obsidian Theatre’s Philip Akin while securing her return to Toronto via a job there.

“Philip knew I knew nothing about not-for-profit theatre, so we came to a quid pro quo agreement: I’d bring my knowledge from working for a large American professional company, and he’d teach me Toronto theatre.”

For Li, producing was always just part of what it took to get her indie shows off the ground.

“I didn’t even know that producing could be a thing you did on its own. I thought it was what you always had to do as an artist to get your work out there,” she recalls. “I was acting for many years and writing plays, and I started running this tiny company to develop shows. I found that process – getting a season up, hiring the actors, choosing the artists – was more interesting for me.”

Lately, Li has been mentoring Cole, who landed a spot in the Academy’s producing stream seven months ago after years searching for guidance.

“I spent my 20s yearning for a mentor, trying to find someone who would impart their wisdom to me,” says Cole. “In the hustle and grind of being an actor out there, I really sensed a lack of inter-generation conversation.

“My interview for the Academy was my first time meeting Leslie, and I was still very nervous about switching gears in my career. But after speaking with her, I thought, ‘This is what I want. I want to be here, and I want to learn from this woman.'”

In Cole’s first big project at the company, she was mentored by Li.

“I remember walking into her office for the first time,” recalls Cole, “and she had all these systems in place using different-coloured sticky notes, colour-coded files and her bulletin board, and I was like, ‘I have so much to learn.'”

For producers, important moments happen behind the scenes and out of the spotlight, but are nonetheless rewarding.

“Producing isn’t a public-facing role,” explains Lester. “You’re not necessarily recognized or taking a bow onstage, but that isn’t a bad thing.”

“Opening nights are great, but sometimes closing nights are even better!” laughs Senewiratne. “When contracts are signed, budgets are done, those are also great moments, when you can dot an i and cross a t.”

“If you’re excited about the sales report or production schedules lining up or that piece you got in the paper, that’s when you know you’re producer material,” says Li.

“You are the vehicle for an impulse or an idea, the seed of a project, and you get to help an artist put that out in the world. You get to stand behind art that you really believe in and bring people together to make it happen.”

“Theatre is collaborative,” says Lester. “If it’s a well-oiled machine, then people feel it, and as producers we really own that. We have our hands in every corner of the process, and because of that we know that success belongs to everybody.”