NOW MagazineCultureTheatreTowards Youth: A Play On Radical Hope is ambitious, sprawling and has lots of heart

Towards Youth: A Play On Radical Hope is ambitious, sprawling and has lots of heart

TOWARDS YOUTH: A PLAY ON RADICAL HOPE by Andrew Kushnir (Project: Humanity/Crows Theatre). At Streetcar Crowsnest (345 Carlaw). Runs to. 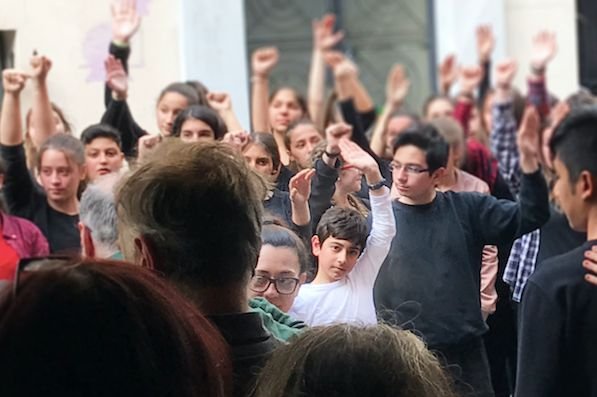 Ambitious, sprawling and invested with tenacious heart, its impossible not to root for Towards Youth.

Scripted by Andrew Kushnir, directed by Kushnir and Chris Abraham and drawing upon years of arduous, on-the-ground research helmed by Dr. Kathleen Gallagher with Kushnir as her vital adjunct, this documentary work from Project: Humanity and Crows Theatre transports us to drama classrooms in Canada, England, Greece, Taiwan and India, where educators and children collaborate on theatrical explorations of the possibility of hope in desperate times.

Running over two hours yet rushing through its frenetic globe-trotting itinerary, the play is inevitably patchy. After a complex and emotionally intense opening sequence set in Toronto, for example, the subsequent visit to Coventry in the midst of the Brexit vote feels somewhat perfunctory. Yet theres no way of imparting the scope of Gallagher and Kushnirs project without at least making a whistle-stop in each of the places where they engaged with kids struggling to forge a future in a world fraught with varying ratios of economic crisis, oppressive governments and environmental collapse.

Most of the valiant, energetic cast is called upon to embody many characters both adolescent and adult some speaking with various accents and even different languages. Standout performances include those of Zorana Sadiq, whose turn as a veteran Greek teacher feels especially lived-in and resonant, conveying a range of attitudes both confrontational and cooperative in just a few fleeting scenes Tim Dowler-Coltman, who brings nuance to a Toronto teenager who isnt as oblivious to the troubling aspects of his gay caricature as he makes it seem and Emilio Vieira, making elegant transitions from mischievous kid to Kushnirs proxy with little more than a roguishly positioned baseball cap and a pair of glasses to demarcate his personae.

The strongest aspect of the staging is its hubbub management. Theres always a lot going on, with Abraham and Kushnir finding a balance of scenes where our gaze is precisely directed and others in which our eyes are free to roam the broad playing space. Only the video projections of archival materials feel excessive.

In terms of what we walk away with, Towards Youth is most affecting and galvanizing when its message is conveyed through interaction between characters, rather than through proselytizing, an aspect of the work that becomes overbearing with the plays crescendo and its repeated demand to ADJUST!

Still, this is a play about youthful fervour and radical hope, so such insistence, while somewhat numbing, feels true to the material.