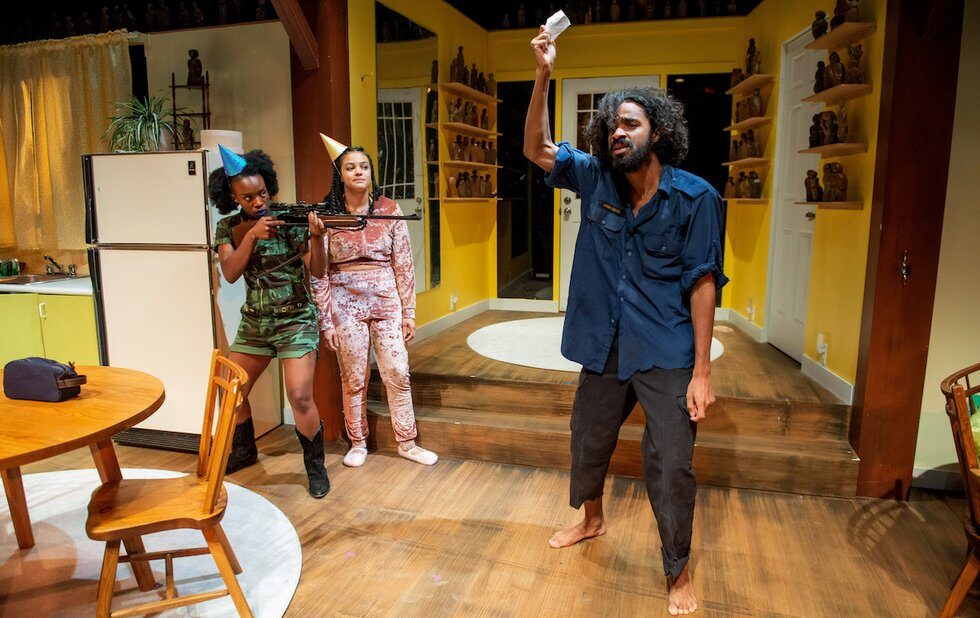 Supercharged with pent-up sex, sororal solidarity, cabin fever, paranoia and a certain wonderment that ekes cosmic significance out of every little thing, Claudia Dey’s Trout Stanley is a manic comedy in which isolation yields fascination.

Set in a house in some wooded north, far from cities and before the ubiquity of mobile phones or WiFi, the play commences with twin sisters on the cusp of their 30th birthday, the 10th anniversary of their parents’ deaths and an encounter with an oddly charismatic drifter who provides a necessary disruption to their status quo. Recalling the monologue-heavy early oneiric chamber dramas of Sam Shepard and infused with a dose of coincidence bounteous enough to rival Greek tragedy, Trout Stanley is brilliant and so relentlessly loopy that one can easily imagine a disastrous production where the actors fail to catch its singular spark.

Thankfully, this revival at Factory Theatre – the company that premiered the play back in 2005 – dexterously rides the frontier between reverence and revisionism from start to finish.

Perpetually clad in a rose-coloured velour tracksuit, Sugar (Shakura Dickson) is a shut-in who tends to the housekeeping and crafts creepy figurines that overlook Shannon Lea Doyle’s set, which fuses domestic familiarity with temple-like elements. Alternating between a violet boiler suit and a smokin’ camouflage hot-pants onesie, Grace (Natasha Mumba) works at a nearby dump and moonlights as the billboard model for Stan’s Western Gear And Shooting Range. This odd couple lives in relative harmony, regularly dining on roasts and listening to Heart’s Dreamboat Annie.

Their rural community, however, has been rocked by numerous disappearances of marginalized women, and the sisters are on the alert for a murderer stalking the woods. Could Trout Stanley (Stephen Jackman-Torkoff) – the bearded, peripatetic, possibly mentally ill ragamuffin who infiltrates their home – be him? (The character names are amusingly on-the-nose: Sugar is sweet, Grace is poised, Trout is fishy.)

Under the deft direction of Mumbi Tindyebwa Otu, the play benefits tremendously from an element all-too rare in Toronto theatre: a purposeful, coherent and unified performance style that leaves no actor looking out of place and instantly deposits us in a specific world with its own tone and tempo. Riddled with grand gestures, angular body language and delightfully cartoonish choreography, the production is propelled by an addled electricity that makes every moment seem urgent.

Each member of this all-Black cast embodies their characters with precision, athleticism and gusto. Their work is supported beautifully by Raha Javanfar’s fleet lighting transitions, which occasionally seem summoned from the characters’ collective unconscious, though David Mesiha’s sound design relies on overstated effects that feel misplaced in the production’s overarching fusion of realism and fever dream.

Trout Stanley flows along in such a seductive gush of sensation and quirk, you might be left wondering if you caught everything essential. What exactly transpired in Trout’s past? To what degree were those missing women reduced to a trope? The show leaves you with questions – and an urge to return for a second viewing.