What happens when you get a 1N review?

Last year, I entered the Fringe lottery in the hopes of producing a play I had written called 2018:. 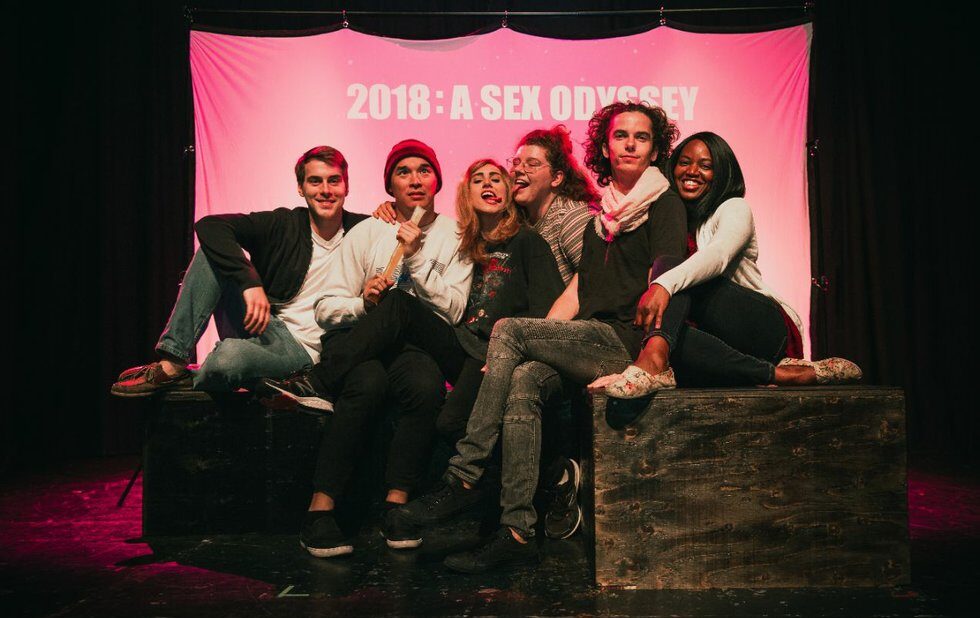 The experienced cast of 2018: A Sex Odyssey gave advice to novice playwright Theresa Ramirez, but she chose to ignore it. (Photo by CampusCreative)

Last year, I entered the Fringe lottery in the hopes of producing a play I had written called 2018: A Sex Odyssey during an extremely dull data course in the summer.

I should mention that the full extent of my theatre experience up until this point was that I had seen a couple of plays. Thats it.

But my number was picked, and so despite the anxiety and doubt that crept in as I submitted the entrance fee, I took it as a sign that I had the chance to realize this zany theatre dream. I had started a ball rolling on a whim, and it looked like it was going to keep rolling.

I need to mention that the Fringe is quite literally a lottery, and anyone can enter. You dont need any experience, or even have anything planned, just a name for your production company. Non-Fringers dont realize this, though, and some seemed genuinely impressed when I told them, I got into Fringe this year!

As a part of Fringe, I was able to attend seminars every month, which teach you about everything from production to marketing and stage management. I realize that it takes years of practice and experience to hone a craft and there are plenty of venues and festivals for acclaimed shows. This is whats so wonderful about the Fringe. In the arts, there are few platforms that give people space to experiment and take the risk of failing in order to get better.

Getting into the Fringe also meant that I had deadlines, which meant that I had to take that script I wasnt quite sure about, swallow my pride and show it to friends, hold auditions, send the script out to a bunch of actors and get their feedback.

These are huge and scary things. I wanted to keep it close to my chest and not show anyone until it was perfect, even though I had no idea what perfect looked like.

But the Fringe teaches you to shake off your ego and let go of trying to be a perfectionist because you dont have time. The ball is rolling and you need to get it done.

Part of the reason for wanting to take on this project was because I am lucky to be friends with some incredibly talented people. Somehow I managed to convince six wonderful actors to get involved in a Fringe show directed by me, a nobody with zero experience, a very strong vision and a very short script.

The cast, unlike me, knew a great deal about theatre, and very patiently taught me some obvious and necessary pointers. As it turns out, 27 minutes cannot be stretched to 40 minutes by the advice to just take a lot of time between scene changes.

But we did it. We spent hours, weeks, months rehearsing. We had an amazing tech rehearsal that went off without a hitch. We were ready. We opened and it went really well. People laughed! We were selling tickets!

Yes, I had a brief cry. Mostly because, as it turns out, all the advice my experienced friends and cast had generously provided, and that I chose to ignore, was accurately reflected in the review. Throughout this whole process I was unwavering on how I wanted the show to look, feel and sound. It turns out that the reviewer hated it and it was all my fault.

But there was a greater challenge ahead. Getting a 1N review two shows into the run, how could I turn it around, enjoy the run and get the most out of the festival?

Everyone says you should take a bad review and make it into a joke, but this was tricky. It wasnt a joke production to me. The entire cast had worked tirelessly on this since April, and technically everything was going exactly as planned. I didnt want to undermine this hard work and effort by calling it all a farce. Plus everyone involved remained so supportive of the show that it didnt feel like humiliation or defeat.

I decided to rebrand the show as a future Fringe cult classic, and surprisingly ticket sales picked back up.

: CALLING ALL #FringeTO
Help us achieve Fringe cult status by coming out and supporting our fun, reality-TV, space adventure! We really care about climate change and the issues affecting our humanity – but its just so easy to get distracted… thats kiNd of the joke! pic.twitter.com/rrbNoUbzOf

From the beginning, I had told myself that I was going to at least make a 1N show… and I succeeded. I found setting that slightly defeatist goal for myself allowed me to enjoy the experience and stay true to my exact vision.

To take a show from script to stage in under a year, you need decisive artistic direction. If you want to have your vision received by the audience in the way you intended, that probably involves a lot more time and collaboration.

I may have learned this the hard way, but coming from a background in stand-up comedy for the last few years, Im really excited to branch out and work better on projects with friends, and also know when to take a back seat.

I learned so much from the experience. I dreamed something up and saw it unfold onstage for audiences at a global festival. I now know that I am capable of bringing together a supportive community of actors, artists and musicians.

But I also learned what was perhaps the most important life lesson of all: what happens when someone thinks your art sucks.

You get over it. You learn from the experience and lose some of your ego in the process, even if the critic probably just didnt get it, of course.