who knew grannie: a dub aria 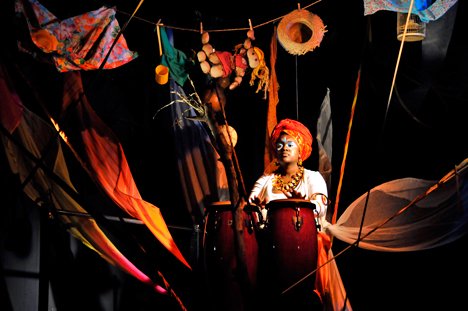 By the end of ahdri zhina mandiela’s who knew grannie: a dub aria, you’ll know the title character really well.

A Jamaican woman who’s raised some 13 children, grannie (Ordena) has just died at the start of the play. We follow the journeys of four grown-ups who have felt her influence as they reunite for her funeral we see them both in their youth and as adults, reminded of the values that she taught them.

Mandiela’s writing, lyrical and imagistic, with internal rhymes and rich language, is a pleasure to hear. Drawing on oral tradition, it blends dub poetry, engaging rhythms, children’s games, live music (excitingly performed by Amina Alfred) and both solo and choral vocal work, the production pulses with energy under the playwright’s direction.

But while grannie’s portrait is clear, that’s not the case with the four other characters: the shy likklebit (Miranda Edwards), musician tyetye (Joseph Pierre), gay chef kris (Marcel Stewart) and politician vilma (Andrea Scott), the only one who stayed in Jamaica.

Each is troubled in her or his own way, and it’s too bad that their explanatory back stories are sketchy. Only the occasional hint lets us know that tyetye’s in jail, for instance, or that likklebit’s losing her sight.

Even so, the four actors bring vibrancy to their work, each blending into the strong choral work and shining in solo moments. We get a powerful emotional sense of who they were in the past and who they are now, three of them having travelled “out ah grass” (into the larger world).

The result is an intriguing production based in the world we know and the more shadowy world of grannie’s “crossing over,” both evocatively captured by Julia Tribe’s two-level set and Bonnie Beecher’s lighting.[rssbreak]