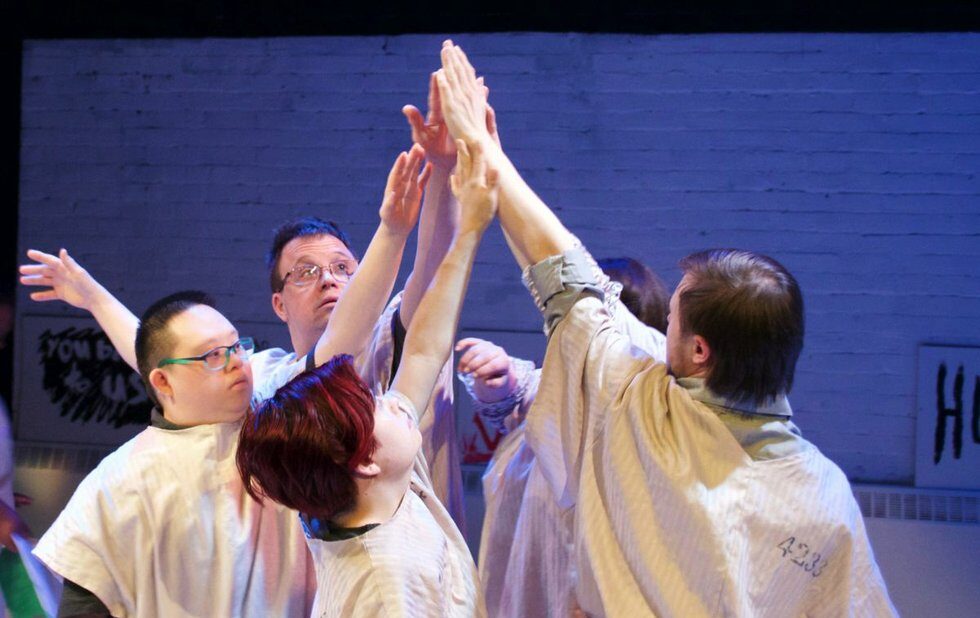 Wildfire, created and directed by Judith Thompson, is a compelling production based on workshops she conducted with seven actors born with Down syndrome, who also perform the play. Part fiction, part history lesson, this compelling production informs and entertains while breaking down barriers.

Thompson and the cast first worked together in 2012 on RARE, a performance piece about their lives that received standing ovations at the Toronto Fringe and was then remounted. Wildfire revisits elements from RARE, including dance and mask work, but its storyline is mostly fictional, a retelling of Romeo And Juliet.

The setting is The Huronia Regional Centre, a now-defunct institution in Orillia that faced class-action lawsuits due to abusive treatment of patients, mostly children with intellectual disabilities.

Wildfires star-crossed lovers are Romeo (Dylan Harman Livaja) and Jazz (Nicholas Herd). Romeo has Down syndrome while Jazz is regarded as normal. When the relationship comes to light they get thrown into detention. Interestingly, gender isnt a factor in the discrimination they face.

Herd is tough and defiant, defending Romeo and their burgeoning relationship. Livaja brings depth to the verse he recites, passionately expressing desire for physical and emotional love. Krystal Hope Nausbaum plays the realist to Livajas dreamer. She delivers a moving monologue about Rosemary Kennedys banishment to an institution after a botched lobotomy. Even a Kennedy couldnt escape being sent away in an attempt to erase her existence.

When the incarcerated characters proclaim we are putting on a play as a protest, clearly the real-life actors are expressing this, too. The story exposes issues like prejudice, bullying and the struggle for rights to relationships and marriage.

Thompsons passion to bring these stories into the light is evident, however the script incorporates so much diverse information that the storyline sometimes becomes unfocused.

The production includes provocative visual elements. At the outset, pieces of material swing overhead projecting foreboding shadows they turn out to be hospital gowns for the patients. Signs conveying horrific messages flip over and become emblems of tribute in the plays final moments.

Wildfire unearths and shares many distasteful facts about the treatment of people with Down syndrome. The brave cast implores the audience to expose secrets and embrace love in the present, a fitting testament to those who died nameless and voiceless in the past.