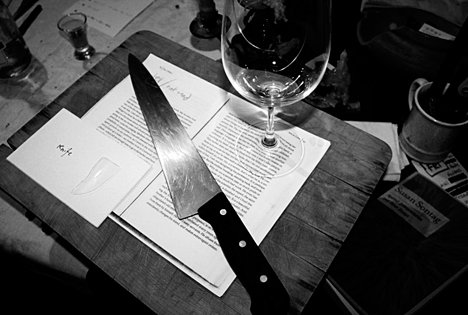 One of a dozen sharp kitchen knives in Wit

What would the theatre season be without a show performed in a house kitchen, with women’s panties hanging overhead, an exposed stovetop gas flame and a character who throws corks at you?[rssbreak]

Wit In Love is described as a performance installation based on one chapter of Sky Gilbert’s novella about the philosopher Ludwig Wittgenstein. You won’t learn a lot about the Austrian-British thinker. This is no bio play, but it’s lots of fun.

The experience begins in the front room of DNA’s semi-detached building, where co-designer/director Magdalena Vasko meets you, hands you a sheet full of instructions (“Don’t touch the performer, unless he touches you,” etc) and then, at an appointed time, shepherds groups of three or four into the performing space, whispering, “Just don’t get hurt!”

Those words resonate, because one of the first things you encounter are a dozen sharp kitchen knives plunged into a counter, looking like they could topple and fall.

There’s also danger in Hillar Liitoja’s unnamed character, who sits at a kitchen table like some abandoned elf and proceeds to tell a meandering story about Schopenhauer, bad haircuts and his one remaining brother who hasn’t committed suicide.

The production (love the snatches of Ravel heard as if through a wall, and the claustrophobic feel) is stronger than the text, which feels like warmed-over Poe or Kafka.