Mazel tov to the folks behind Yichud 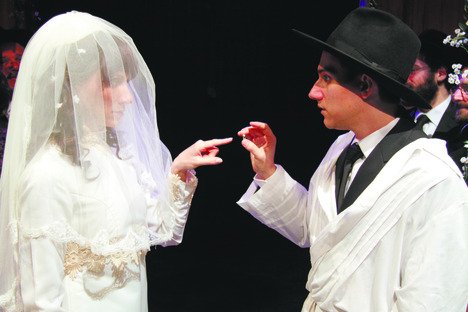 Party on with Julie Tepperman and Aaron Willis.

I now see exactly why some of the folks at the Harold Green Theatre Jewish Theatre Company got cold feet about Julie Tepperman’s Yichud. It’s complex, it doesn’t portray Orthodox Jews as perfect representations of piety, and when it comes to issues of authority, intimacy and tradition, it asks really hard questions.

But isn’t that exactly what theatre is supposed to do? And wouldn’t a Jewish-based theatre want to lead the way when it comes to all of that?

The minute you walk into Theatre Passe Muraille, you know Convergence Theatre will stay true to its mandate of integrating audience into the action. At the box office, women are encouraged to sit downstairs, men upstairs – it’s Orthodox law that they be separated. Walk into the performance space itself and pre-wedding festivities are in full bloom. The men are upstairs partying at the Tish, the pre-ceremony men’s party, the women are downstairs attending to the bride.

Diane Flacks as Malka, the mother of the bride, is especially good during this pre-show piece, greeting the audience members, appearing distracted at other times – foreshadowing her inner conflict – or swaying to the music.

“Yichud” is Hebrew for “seclusion” and the moment post-ceremony when the bride and groom are together alone for the first time, but the play itself presents a series of private moments between family members, all unfolding during the many phases of the wedding.

Malka and husband Mordechai (Richard Greenblatt) have their own marital problems that emerge in a sequence with content that will make you wince.

And then, finally, Chaim the groom (a slightly too twitchy Aaron Willis, who also directs) has his first private moment with Rachel (Tepperman), a moving sequence that should have put to rest any fears official Jewry had about the work.

Tepperman evokes Rachel as the new modern Orthodox woman with soulful skill, Greenblatt is plainly loving the opportunities middle age has brought him as an actor, but it’s Rubenfeld, charismatic and terrifyingly obscene, who gives the most memorable performance.

To Theatre Passe Muraille and everyone else who made sure Yichud got produced – mazel tov.

Read more on the Yichud controversy[rssbreak]