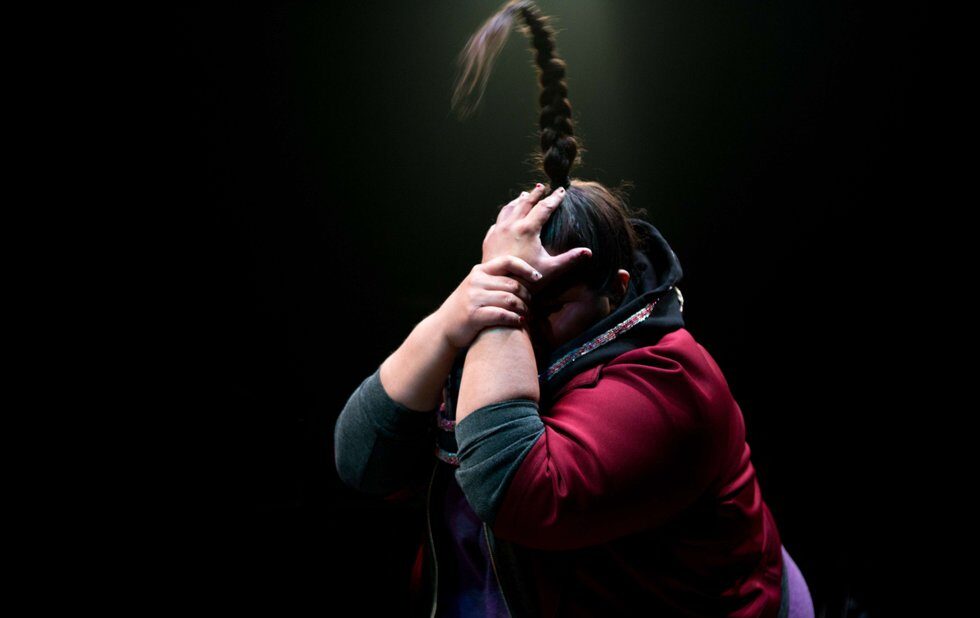 Yolanda Bonnells solo show bug is an enthralling journey into the struggles of two Indigenous women and their vices.

The character we spend the most time with is the Girl, who starts out naive and hopeful, full of love for fireflies and wishing she, too, could glow. The Girl is light and happy before she experiences the 60s scoop, abandonment and addiction, the latter of which takes the form of Manidoons, the second character.

Bonnell physicalizes the Manidoons (the Ojibway word for bug, worm, insect or germ) by dropping to the ground and, with a neck movement, causing her hood with beaded eyes to drop over her face. My only qualm with the production is the voice Bonnell chooses for the Manidoons its cartoonishly evil and slithery, when it might have been more effective with a different treatment. But maybe thats just what the Girls Manidoons sounds like in the throes of addiction.

In addition to the Girl and Manidoons, theres a brassy older woman with a thick rez accent, who cracks jokes about the past when shes not close to throwing fists, a character-type thats just like many Aunties at family and friend gatherings. Her humour often covers the devastating topics shes telling stories about, which include police brutality, suicide and drug use.

Bonnells physicality is impressive, her movements spanning the blue and green shimmering floor that is her stage, designed by Jay Havens. She throws herself to the ground, pulls herself up by the braid, blocks her own mouth from speaking. She distinctively switches from the wide-eyed and light voice of the Girl to the older woman character.

Michel Charbonneaus lighting effectively mimics fireflies, signals chaos and suggests character revelations, while Havens set evokes a sweat lodge, with the first row seated in a circle and two giant stones serving as the only set pieces. Sometimes Bonnell lays atop the largest stone on the stage, as if it were a bed. Other times she plops down in the first row on another stone, nudging her seatmates when shes playing the older woman character.

There are many Indigenous-specific moments in the performance: from launching the show with an Anishinaabe water song, performed by Bonnell and director Cole Alvis to the medicines available for smudging, as well as the money jar for a defense fund for water and land defenders in Wetsuweten.

The overarching themes of abandonment and addiction, however, are unfortunately universal.