NOW MagazineCultureMusicalsThis Cabaret isnt much of a celebration

This Cabaret isnt much of a celebration 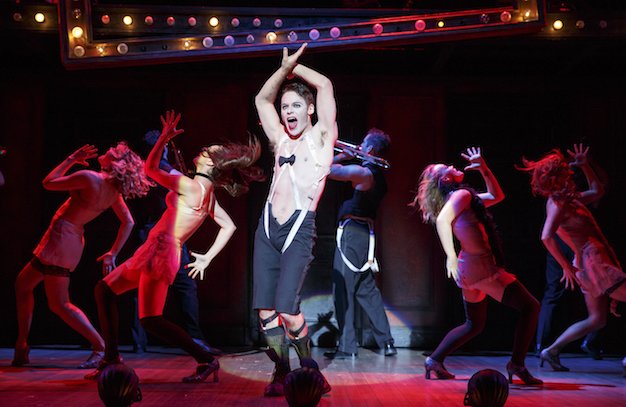 One of the great American musicals, John Kander and Fred Ebbs Cabaret, with a book by Joe Masteroff, takes place in early 1930s Berlin, as the Nazis rise to power. Both tuneful and unsettling, the show examines the moral and self-protective choices the characters make to survive.

Budding American novelist Clifford Bradshaw (Benjamin Eakeley) arrives in Berlin and meets, through Ernst Ludwig (Patrick Vaill), the world of the Kit Kat Klub and one of its performers, the impulsive Sally Bowles (Leigh Ann Larkin). Bradshaws relationship with Sally is at the heart of the show, which cleverly uses the musical numbers in the club to comment on the action outside.

Central to the action is the Emcee (Randy Harrison), our host for the evening, who hovers around the stage, watching what takes place, even when hes not helping orchestrate it or performing an entertaining turn.

The touring production by Roundabout Theatre, part of the companys 50th anniversary, is a revival of its Tony-winning 1998 staging co-directed by Ron Marshall and Sam Mendes. For this production, BT McNicholl directs and Cynthia Onrubia recreates Marshalls choreography. The result? A spotty, often surface show, with little sense of this disquieting, menacing world everything feels too carefully organized.

Harrison makes a charming, energetic and playful Emcee, joking with the audience and clearly enjoying himself. Whats lacking, though, is a touch of the dangerous. And in this staging, the evenings finale, which keeps the Emcee centre stage, isnt as upsetting or shocking as its meant to be.

Larkin has a fine voice, though its only in the title number that she gets to present the ever-shifting blend of emotions that make Sally, who ignores the heady politics swirling around her, both magnetic and volatile. Its hard to make Bradshaw an involving character, and though Eakeley tries, hes not able to do so. Murray doesnt get deeply into world-weary, practical Schneider until her second act song, What Would You Do?, at which point we see some of conflict the woman feels.

The most consistent part of the evening is the wonderful music, played with energy and occasional poignancy under musical director Robert Cookman.