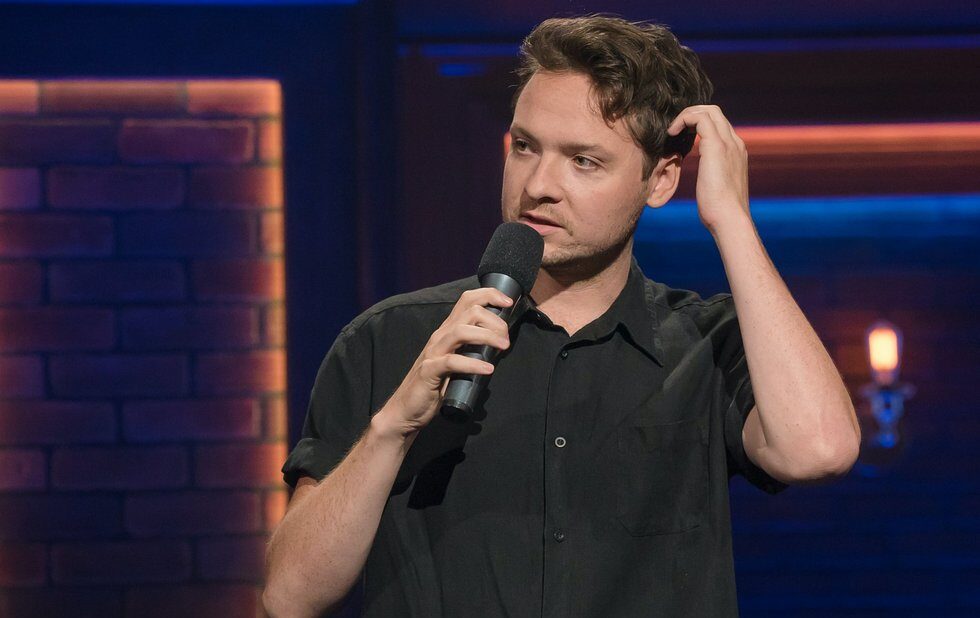 Tom Henry is the stand-up comic we all need during the pandemic.

The stone-faced Toronto writer/performer – whose special 66 Jokes comes out today on Crave – has a way of looking at life that is off-kilter, oddly calming and, of course, very funny.

“If there’s anything I like about this whole thing, it’s how surreal it all is,” says Henry on the phone, his voice just a smidge more animated than it is in his stand-up act.

“I really enjoy seeing things that are strange. Every year people complain about the Air Show, but I can’t believe there are these crazy planes in the sky. I love that. So in a way, even though things are terrifying and obviously I don’t want anybody to get sick, it’s a once-in-a-lifetime opportunity to see the world operating this way.”

Not that he’s ever going to include coronavirus jokes into his stand-up work.

“It’ll quickly become the thing that every comic’s talking about, obviously, and I think there will be a lot of value in not talking about it,” he says.

Henry’s never been one to follow trends. Back when he started, over a decade ago, the Toronto-born comic says a lot of stand-ups were telling stories and doing long, intricate bits.

“I just thought, even if I’m not good at this, there’s going to be a lot of value in telling short, quick jokes. It’s almost going to be a relief for the audience.”

His smart but accessible material covers everything from Newtonian physics to bad full sleeve tattoos – but he always comes at a joke from an unexpected angle. He frequently sends up banal aphorisms and stupid accomplishments. It’s no surprise that David Letterman was one of the first comics he warmed to, while a child growing up on the Danforth. (Other future comedy gurus included Rodney Dangerfield, Don Rickles, Zach Galifianakis and Demetri Martin.)

The fact that Henry has never relied on topical material – or even personal material, for that matter – has also meant that his jokes have aged well. Which is why for the 45-minute special he’s been able to draw on a few of his oldest jokes.

“I was writing comedy on a blog for a few years before I did stand-up,” he says. “So I was kind of able to hit the ground running, writing-wise. I think for that reason some of the jokes have held up. Although some of my early stuff would be awful.”

His deadpan persona was there from the start. Even in the brief intro to the special, taped a few blocks from the club where he shot the special last July at Montreal’s Just For Laughs, he poses against a brick wall, staring with no expression at the camera, his friend Max Turnbull’s (aka Slim Twig) music underscoring the moment.

“From the start I never felt like I was putting on a persona,” he says. “I’m sort of a low affect person in general, even though I don’t feel that way. I get excited and passionate about stuff, but it doesn’t show.”

Does he ever smile or laugh off the stage?

“Yes, I’m laughing right now,” he says. “But [being expressionless] has kind of worked to my advantage. I think a lot of it was self-protection. When I first started doing comedy, it was so scary – it still is, especially when you have to do a show in a small town and you don’t look like a guy from a small town. It’s helpful to have this wall that says, ‘I don’t care.’ Even though I do care very much, and it does hurt when people don’t laugh.”

Like any comic who does short jokes, he knows that he needs to mix up the rhythms of his longer sets. He does that several times in 66 Jokes, each time subverting a standard comedy trope, whether it’s engaging in crowd work or doing impressions.

“We live in such a weird time for stand-up comedy,” he explains about these meta-bits. “It’s so prevalent and over-saturated. There’s a Netflix special released every week. All the celebrities are coming back to the form. I think you have to be aware of the fact that it’s so popular. I still love the artform, but sometimes it almost seems like it’s going to tire itself out.”

Even the title of the special tells you something about Henry’s approach to comedy.

“Many comedy specials have some kind of edgy adjective in their title: ‘Unhinged’ or ‘Disturbed’ or something. Or they reference a line from a joke: ‘Skinny turkey,’ from a joke you will hear 40 minutes in. I wanted something simple that didn’t do any of those things.

“I also liked the idea of letting people know that there are a lot of jokes in it. So if people didn’t like one, there would be another one, quickly. I counted them all. I felt like it was a sign. 66 seems like a cool number. Before I started counting, I thought, ‘I hope it’s not 72, that doesn’t sound as nice.'”