With events like New Year's Eve at Nathan Phillips Square and the Santa Claus Parade cancelled or moved online, the city is also launching a grant for festivals 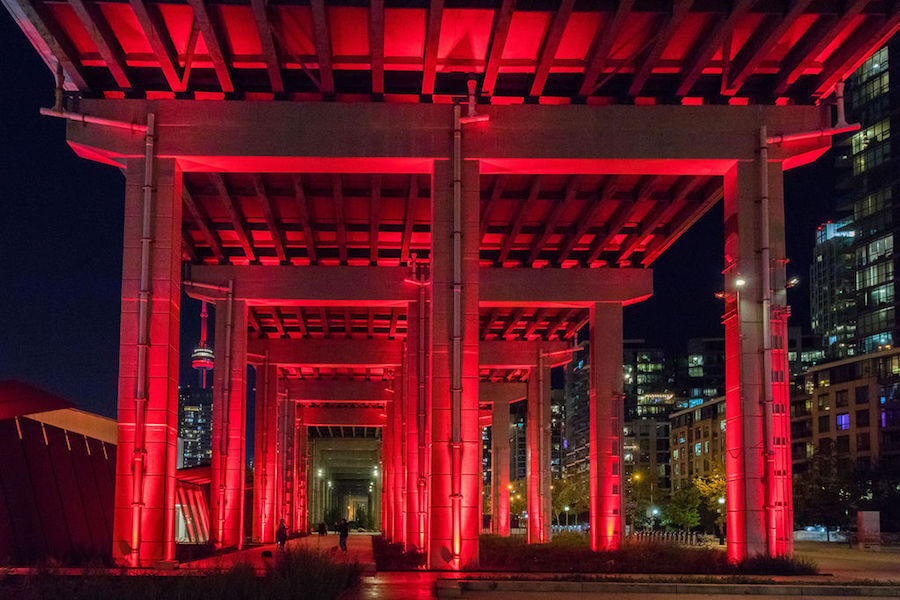 The Bentway went red this week for #LightUpLive, a day of visibility for event workers affected by COVID-19.

New Year’s Eve is officially cancelled in Toronto. Or at least its annual official celebration party at Nathan Phillips Square is – one of many events no longer happening due to COVID-19. Christmas, too.

The city has cancelled all major outdoor city-led and permitted events and festivals until December 31, 2020. No permits will be issued until the next calendar year.

The move is an extension of a cancellation that was previously meant to last until September 30, which had already extended to include this October’s Nuit Blanche, which has moved online.

Other events, such as the Santa Claus Parade, the 30th annual Kensington Market Winter Solstice and a variety of Halloween events are listed as “pending,” with the city teasing “alternative plans.” So expect more virtual experiences in the near future.

The announcement does not include outdoor sports facilities or other spaces permitted in stage 3 of reopening (with current gathering limit restrictions, which were recently reduced). It also doesn’t include professional sports.

On Tuesday night, several venues across the city lit up red to draw attention to the plight of the ailing events industry.

The cancellations are a big blow to a live event and festival industry already reeling during the pandemic. Major festivals and events need long lead time and often access to city property,

To mitigate those impacts, the city has launched the new Cultural Festivals Recovery Program (CFRP) that will offer $565,000 in grant money for cultural festivals that have been impacted by the pandemic.

To mitigate the impacts of the pandemic on festivals and events, the City has repurposed grant funding that was previously approved by City Council and launched the Cultural Festivals Recovery Program (CFRP), providing $565,000 to support cultural festivals that have been impacted by the pandemic. More info on that is available here.