What it’s like to attend a bike rave in Toronto 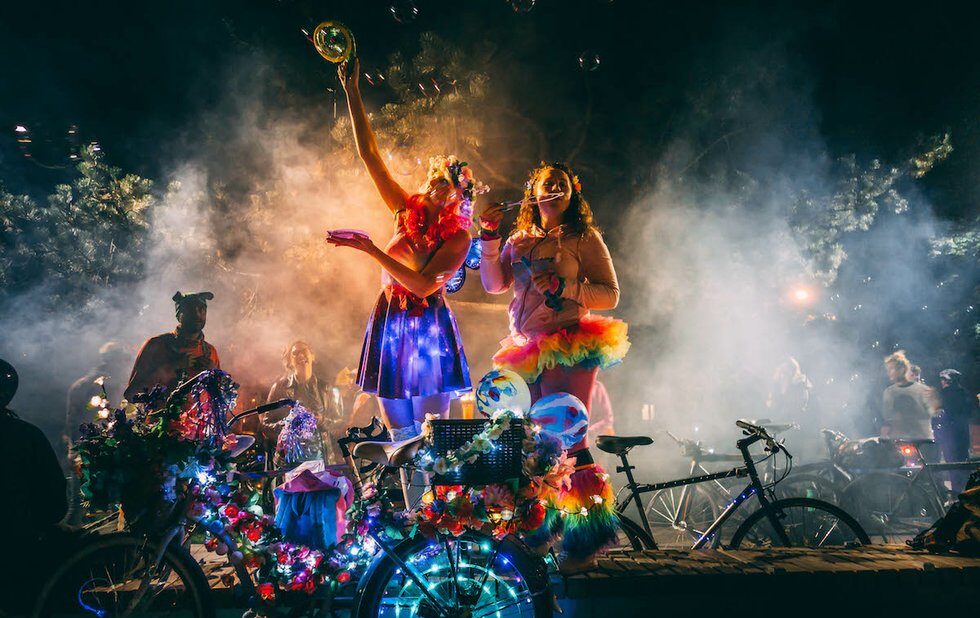 Bike ravers lit up the night on a September 8 ride around downtown.

When 300 cyclists took over the downtown core one Saturday night earlier this month, it wasn’t a politically motivated Critical Mass rally or a ghost ride mourning the loss of a community member.

It was for a much happier occasion: a bike rave.

Circling around the TD Centre in the financial district on September 8, the cyclists flashed multi-coloured lights as electronic music pumped out of mobile speakers. These two-wheeled ravers showed the people of Toronto that cycling is something to be celebrated rather than criticized.

Many in the cycling community, including K

“For me, the bike rave is not a once-a-year event,” says K

Toronto’s bike rave scene has taken its cues from Vancouver, where, according to underground cycling lore, these events grew to attract 7,000 riders – and hundreds of 911 calls from residents, some concerned about a possible riot – before ultimately being cancelled in 2015. (Some groups have organized smaller bike raves on Facebook since.)

“Everyone is having fun and is responsible and accountable, so worrying about the police is the least of our problems,” says K

Having experienced Critical Mass rides in Budapest and bike raves in London, UK, I was excited to see what a bike rave in Toronto would be all about.

But, as I can now tell you, it’s about more than a one-night party – the bike rave reflects the story of a young city trying to find its own cycling culture in the face of bad press and motorists who believe bicycles have no place on roads.

This year’s rave may not have been as big as years gone by, which have had upwards of 1,000 attendees, but 300-odd ravers certainly isn’t a disappointment.

With his tall bike, a 6,000-watt sound system, smoke machine, flashing lights and a unicorn attached to the handlebars, K

He’s well known in the cycling community. During the 2003 blackout, he secured gasoline-powered generators to power speakers that pumped out tunes till the wee hours at an impromptu west-end block party. Every year since, Toronto’s cycling community has held a Blackout Party ride to commemorate that unusual night.

His ultimate fantasy is a 24-hour rave.

“In an optimal world, I would have six- to- eight large sound systems,” explains K 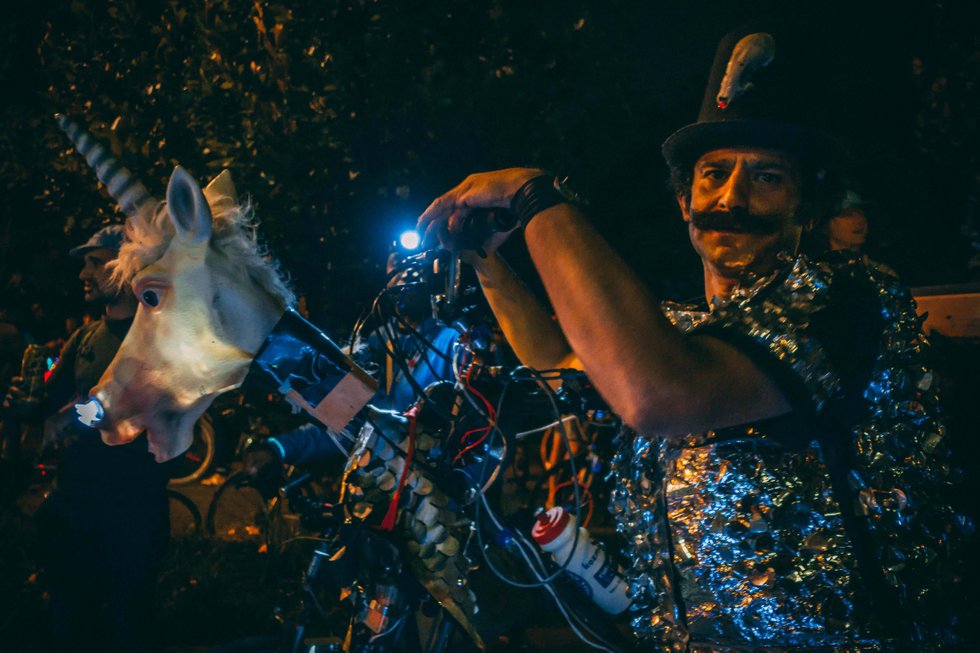 While cycling clubs in Toronto tend to be divided between weekend warriors (aka Lycra-clad dads out for Saturday spins on multi-thousand-dollar Cervélos), bike couriers, fixed gear, commuters, fat tire bikes and everything in between, the bike rave is one event where everyone comes together.

No drugs are needed – the high from the ride is enough. K

Gerry D., a participant this year, told me one of his favourite moments from past years was when a GO Train driver tooted his horn at the cyclists. “We thought that was wonderful,” he said, adding that pedestrians and motorists are generally supportive. “We get a lot of positive vibes from cars honking, people taking photos and videos, and children waving at us. Everybody just wants to join in when they see a bicycle parade.”

Others join in – from longboarders to, in one instance, a man who ran alongside the cyclists for the entire duration of the nearly four-hour rave.

Of course, organizing a bike rave has particular challenges.

Regulars like Gerry D. and “Toby” of Toronto Cruisers often volunteer to keep the non-sponsored event running safely. One of the most integral role is the “corkers” who place themselves in the middle of intersections to ensure that even after the light goes red, all cyclists get through. Another primary role is the “parachuter,” who ensures stragglers at the back don’t get left behind and motivates them to keep moving. However, the point isn’t to be speedy. The top speed a bike rave moves at is under 15 km per hour.

The event doesn’t cost anything to put on, but maintaining his tall bike and sound system is costly for K

While bike raves are a lot of fun, the previous organizers – who asked not to be named – said one of the reasons they pulled out after five years was due to the stress of ensuring others were safe. Reflecting on his experience organizing bike raves, which at its height in Toronto reached 1,000 riders in 2016, the previous organizer said he felt personally responsible for the safety of every single raver.

“It was a learning experience, managing crowds of people and treating them as a single unit,” he said. “It’s pretty challenging to get 500 people to move in unison from one point to another safely.”

He didn’t join this year’s ride, and has no regrets about passing the torch.

As for next year, K

“We’re growing toward a vision that has multiple stages. In the first stage, we’re looking to build a community and make the annual bike rave stronger,” he says. “The second stage is to do more outdoor public events and parties. The hurdle in front of us is public space. It’s becoming as rare as a unicorn.” 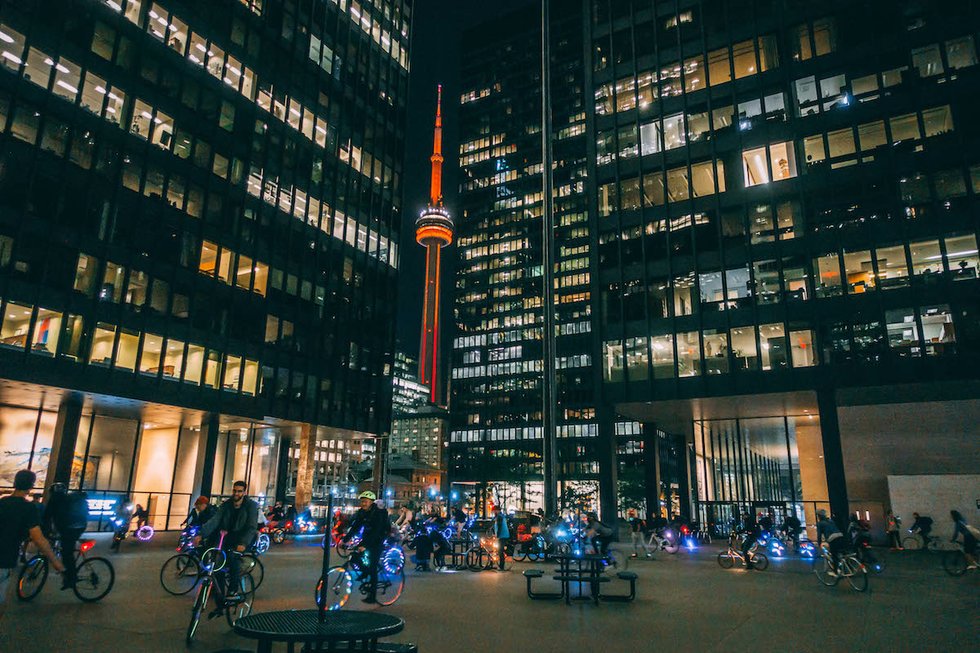 Toronto urban cycling groups to give a spin

For those seeking a more civilized (depending on your outlook) time of day to take part in a community ride, there are many cycling groups to join – on weekends or after work.

From May to August, Toronto Cruisers put on a weekly Wednesday evening ride starting at 8 pm on Huron and finishing up around midnight. (You can drop out earlier if you like.) They also host several bike parties (different than raves) throughout the summer months.

Neon Riders also host weekly Wednesday rides for those who like enjoy crisp Autumn evenings. As the name of the group suggests, fairy lights and all things flashing are welcome.

Roadkill Toronto cycles “anywhere our legs take us – planned or spur of the moment,” as one of the founding members puts it. The pace is around 30 km/hour and they often do “burns” or long rides exceeding 100 km outside the city on weekends to places like Hamilton Falls or up the Don Trail and back down the Humber Trail.