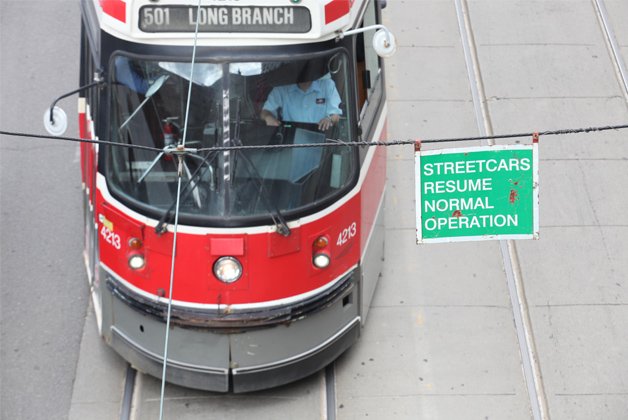 Those new streetcars that will start showing up on downtown streets in the next few years won’t be worth the $5 million price tag if they end up stranded in a sea of car traffic.

And the place this is most likely to occur is King Street – unless the city begins to make some tough choices. Will it?

On Monday, June 24, the TTC Commission approved a study to look for options to improve service on King, TTC CEO Andy Byford suggesting a look at left-turn and parking restrictions, and TTC chair Karen Stintz appearing to push a consideration of transit-only lanes and a ban on cars. The idea was even floated of a pilot project restricting cars during the 2015 Pan Am Games, although after the meeting the timing of such a plan seemed less clear.

It’s good that the musing has begun, but to put things in perspective, this is the fourth or fifth effort in the last two decades to deal with increasing congestion on King and other downtown thoroughfares.

The city’s new Official Plan designates King as a “transit priority corridor,” and indeed the 504 carries more than 57,000 people per day. Streetcars come every two to three minutes during rush hours (about the same frequency as rush-hour subways on the Yonge line), but riders have difficulty boarding because of overcrowding. The route competes with heavy traffic, legally and illegally parked cars and many illegally stopped delivery trucks and taxis.

As a result, there is effectively only one lane between Bathurst and Jarvis, meaning packed streetcars end up creeping along, making it hard to keep reliable schedules.

The mayor has already come out against restrictions on cars, and convincing councillors to ban parking and left-hand turns will likely be a challenge.

Things haven’t gone well in the past on this front. In 1993, the old city of Toronto instituted peak-period reserved streetcar lanes on King between Dufferin and Parliament, but these were never enforced.

In a 10-week pilot project in 2001, the TTC hired paid-duty officers to police no-stopping zones, illegal left turns and improper use of the streetcar lanes. After 10 weeks and over 8,000 citations, it was determined that the force was unable to allocate sufficient resources to continue.

Then, in 2007, the TTC again initiated a discussion around clearing obstacles in the Spadina-to-Jarvis section of King. Opposition emerged from the local councillor, taxi drivers and businesses. Shortly after, the city began a study on downtown traffic patterns that, six years later, is near completion.

Will we have better luck this time? There’s no question that streetcars need to be separated from traffic in the core. In 2008, the TTC suggested a model that could be used for the 2015 Pan Am pilot project involving a temporary reserved streetcar right-of-way on a four-to-five-block section of King, employing a process similar to the one used by Waterfront Toronto on Queens Quay west of Bay in the summer of 2009.

The concept incorporated physical changes to the street that would bar ordinary traffic at all times but allow vehicles access to one side of each block so regular commercial and residential activities could continue.

Besides planning for a possible pilot, one action could be done fairly quickly: prohibit stopping or standing from 7 to 10 am and 3 to 7 pm, an expansion of current restrictions. But, of course, to really get streetcars running smoothly, these restrictions would have to be in effect all day.

It would be easy as well to adopt left-turn prohibitions at most intersections in the central area on King or elsewhere on the corridor. To help with enforcement, council could designate the problem sections of the street as “transit priority zones” where fines for traffic and parking violations would be doubled to encourage compliance. Bylaw officers would be needed to ensure cars don’t block the street, and a police presence would be required to deal with aggressive taxi cabs, drivers or delivery trucks.

And perhaps it’s time for the city to initiate a discussion with the province on expanding the red-light camera enforcement program to include illegal left turns as well as stopping and parking violations. Such systems exist in cities in Europe and Asia, and while expensive to implement, they’re cost-effective over time.

But the TTC also needs to do a better job managing service on King as it now is: ensuring more service assistance crews, laying more track to allow easier short turns, assigning cars to be on standby to fill in gaps in service, and simply regulating service using existing GPS systems.

Until we actually have that new network of LRTs and the Downtown Relief Line, our transit planners have to find ways of enhancing the service we do have. King offers a chance to try a new model.