NOW MagazineNewsCutting the police budget is no longer unthinkable

Cutting the police budget is no longer unthinkable

For the first time in memory, Toronto police spending sat at the centre of a city council budget debate. This was not a small development. 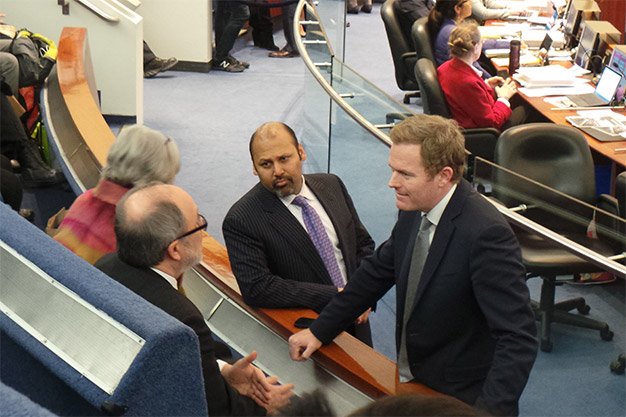 When it finalized the 2016 city budget on Wednesday, February 17, council managed to shave $220,000 from the cost of policing — while rejecting $24 million in further trims to a police budget that had grown in excess of $1 billion for the first time.

That the Toronto Police Service’s allocation would be allowed to swell by more than 2 per cent when all other divisions and agencies had been asked to cut back by at least that much was not altogether surprising. In fact, it was standard.

What did make this year’s deliberations special was that the longstanding disparity between the police and everyone else was a serious topic of conversation at all. For the first time in memory, police spending — the second largest piece of the city’s overall operating budget, behind only the TTC — sat at the centre of a city council budget debate. This was not a small development.

In a broad sense, this was a consequence of the recent shift in public attitudes in Canada and the U.S. that has subjected police to a new level of scrutiny more appropriate to their power. In the specific context, however, it was a result of three former policing officials — ex-deputy chief Peter Sloly, ex-Police Services Board chair Alok Mukherjee, and ex-vice-chair Michael Thompson — speaking out about what they saw as entitlement and intransigence in the face of efforts to realize efficiencies and rein in spending.

The councillor for ward 37 (Scarborough Centre), Thompson was the public face of police restraint at the meeting. He moved a series of motions structured as a four-step cascade of gradually diminishing bids to nip at the force’s operating budget: the first motion would cut $24 million (flatlining police funding to 2015 levels) and reallocate the money to a dozen or so other priorities such as childcare subsidies and bus maintenance the second would effect the same sort of change to the tune of $20 million the third, $18 million the last, $12 million.

It wouldn’t be the most surgical or elegant way to trim the police budget, but Thompson explained that his time on the board had taught him that bluntness was sometimes necessary.

“And quite frankly,” he added, “blunt instruments can work — at times.”

Each of the four motions failed by the same 12-28 margin, Mayor John Tory’s allies having been given Ford-like “cheat sheets” instructing them how to vote. 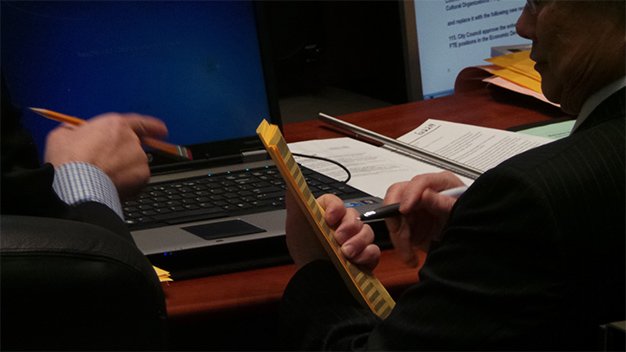 That these motions weren’t adopted was also not much of a surprise. Each side knew roughly how many votes they could count on and that it was highly unlikely Thompson would round up a majority even absent a mayor’s influence, most councillors don’t like to jiggle with big numbers on the fly if they can help it.

The point, it seems, was the symbolic value.

The question that grabbed me beforehand was whether the motions would fail by a 2:1 or 3:1 ratio I hypothesized that the former would constitute a victory of sorts. In the end, there was one council member in favour of the cuts for every 2.33 opposed, which was notable support for an acknowledged “blunt instrument.”

More significant, however, was the fact that — save for Giorgio Mammoliti — councillors repeatedly and emphatically registered their dissatisfaction with the status quo and their in-principle agreement with addressing out-of-control police spending. (Rob Ford, Council’s most reliable and ironic champion of police, was absent from the meeting. Please enjoy this 2004 clip in lieu.)

The day before, once it had become apparent that there would be an effort to cut the police budget on the floor of council, the police board revealed the members of a task force that would be responsible for bringing about an overhaul of the service. Co-chaired by Chief Mark Saunders and new board chair Andy Pringle, it’s comprised of six members of the police force and six members of the public, including some — such as former city budget chief and mayoral candidate David Soknacki — with legitimate credibility on the subject.

Council members uneasy about the rising cost of policing but reluctant to make the cuts themselves would instead be able to put their faith in this new Tory-backed committee, and that’s exactly what they did.

There’s certainly a good argument that a thorough examination of police operations would result in smarter and more sustainable reforms than forcing an immediate response to a funding shortfall. But there’s already a recent KPMG consultants’ report that contains such analysis, and the police dragged their heels on implementing any of its recommendations.

After all, the Toronto Police Service as an institution generally refrains from any indication that it is seriously interested in meaningful change.

Back in April 2015, Tory — who sits on the police board — supported a move to throw out a widely lauded carding policy from 2014 in favour of a narrower set of guidelines more palatable to police, promising that a third-party review would catch any problems down the road. He supposed it was better to achieve buy-in with a watered-down policy than stand behind something resisted by the force. Two months later, in response to intense public pressure, he conceded this had been a mistake and swung the board back around to supporting the 2014 policy that it should have implemented in the first place.

It was a case of a mayor lacking institutional memory giving much benefit of the doubt to a police force that had earned none. Or, looked at another way, it was a police force taking advantage of a new guy whom it saw as both sympathetic and naive.

As Thompson said about policing when defending his budget motion, “There’s always a continuant of ‘next year, next year, another study, another review,’ and so on.”

Shelley Carroll, a reform-minded police board member and another previous budget chief, opposed the immediate cuts because she felt the task force would be a better long-term strategy for achieving “fundamental culture change.” But in her speech to council she did acknowledge that one area in need of such change is police “stonewalling and sometimes co-opting their own civilian oversight.”

There is no reason to be optimistic that these reform efforts will succeed where countless others have failed. But, for once, the conditions exist in which they maybe, potentially, conceivably could.

The societal shift around police and policing has forged an environment in which real change is no longer unthinkable. Unlikely, yes, given the extent of the entrenched interests and power structures involved, but not unthinkable.

“I think that this is very much our last, best hope to make a change,” Soknacki told CBC’s Metro Morning, “because society is changing.”

When he kicked off his campaign for mayor in December 2013, Soknacki intended to make the police budget a defining issue of his candidacy, the “third rail of municipal politics” that others refused to touch. He didn’t succeed in advancing the political discourse to the extent he would have liked, but in some respects the mainstream discussion has finally caught up to him. Even if it’s just a window that has opened a crack, it’s an opportunity to be seized.

Tory, in his own way, is equally sincere in his ambition to cut police costs. But he tends to believe that he’s the first person to have ever tried something, and that if only others had been as focused and determined as he is now that they could have gotten further. As a consequence, it can be tricky to discern on which issues he knows something that we don’t and on which he’s simply underestimating the challenge.

But for whatever it’s worth, on that Wednesday afternoon at council, he was willing to bet me a beer that real change is on the way. He is gambling that all the concentric circles of circumstances have clicked into place and that the time, at last, is right. The public demands it.

At the same meeting, Councillor Joe Cressy moved that the police budget be snipped by $220,000, with the money being redirected to a crime-prevention program that forms part of the city’s Youth Equity Strategy. Despite the instructions on the mayor’s cheat sheet, it passed by a healthy 25-17.