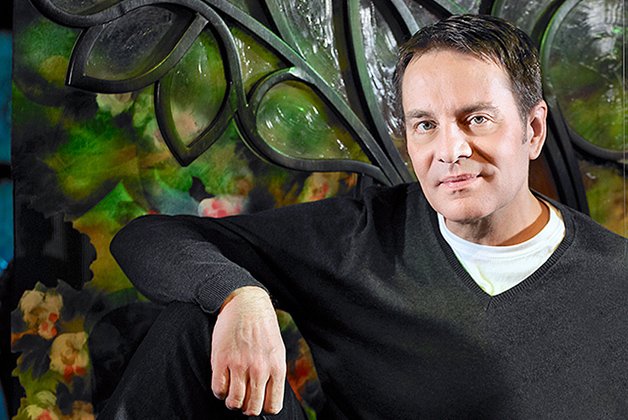 Ronnie Burkett will be flying by the seat of his pants each day.

THE DAISY THEATRE created and performed by Ronnie Burkett. Presented by Ronnie Burkett Theatre of Marionettes/Luminato at the Berkeley Street Theatre (26 Berkeley). Opens Friday (June 14) and runs to June 23 at 9:30 pm. $25-$35. 416-368-4849, luminatofestival.com.

A daisy, apparently, can grow in the dark, an image that inspired master puppeteer Ronnie Burkett to create The Daisy Theatre.

He first thought of the title two decades ago when workshopping Tinka’s New Dress, one of his extraordinary multi-character puppet shows.

“I knew that two of the puppets, Franz and Schnitzel, would be improvising their dialogue, and I’d never done that onstage,” recalls the Toronto-based Burkett, who then lived in Calgary. “At the same time I’d also heard on the CBC about a right-wing farm woman who held forth on lots of topics, and I decided to make a puppet called Edna Rural and have my artistic way with her.

“I built her out of old parts and intended being quite malicious with her, but after her first line, ‘Lord love a duck,’ I just couldn’t be harsh with her.”

The result was The Daisy Show, for which Burkett read the local Calgary papers every day and then riffed each night on the headlines using Edna and other characters.

“But the idea of the show, in which characters present the truth in a metaphoric fashion, goes back to Czechoslovakia during World War II, when a group of theatre-makers, including puppeteer Josef Skupa, wrote simple yet sophisticated shows that passed the Nazi censors.

“They spoke the reality about the Czech situation but did so without offending the invaders. Two of Skupa’s characters, father and son, are the basis for Franz and Schnitzel.”

In its current incarnation, The Daisy Show is a blend of marionettes old and new, cabaret turns, news commentary and short plays by a number of well-known Canadian playwrights, among them Daniel MacIvor, Joan MacLeod, Anusree Roy, Damien Atkins and Chris Craddock.

“I spent some time thinking about whether or not to make caricatures of politicians or celebrities, but I really didn’t want to make, for instance, a Rob Ford puppet. With the rep company of actors I have, I can suggest that I’m talking about the Fords or Harper without building little effigies of them,” says Burkett, who won the Siminovitch Prize in Theatre for his puppet designs and is still touring his latest work, Penny Plain.

“After all, sometimes politicians don’t have the shelf life you hope for.”

The great joy of his earlier Daisy Theatre was not having a planned design or script each night Burkett could simply draw on characters who initially had nothing to do with each other.

For his Luminato shows, Burkett has resurrected and redesigned Edna Rural, Franz, Schnitzel and faded film star Esme Massengill, who will appear along with other figures.

“Edna is my hopeful yet often unaware Albertan, now living in the UN of nationalities that makes up Parkdale it’s all an assault on this small-town housewife, and things aren’t made better by the fact that she has a lesbian niece in the gay ghetto.

“Esme is my bitter, tired, been-in-show-business-too-long diva, and Schnitzel is my optimistic innocent, the little philosopher who asks about the big things through simple questions.”

There’ll be a different guest artist every night, composer John Alcorn has written songs for the vaudeville part of the show, and Burkett will rotate the short scripts he presents.

“I’ll be flying by the seat of my pants, writing out a loose playing order every afternoon. Or maybe an item in the news will draw my attention and the whole show will change,” he smiles. “I’ll be challenging myself, going out and living in the moment.”

Burkett admits he’s surprised himself by resurrecting The Daisy Show.

“Now I think I’ll be doing it again for the rest of my career, along with other productions.

“I thought I was too old to be an angry young man, but now I realize I’m at the perfect age to have an opinion onstage.”