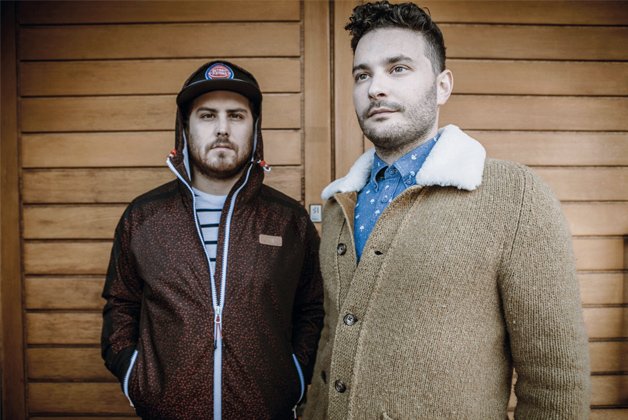 The music that’s awkwardly playing in the background while I hold for Joshua Epstein of Dale Earnhardt Jr. Jr. is the antithesis of his duo’s smooth electro pop. It’s brash, cheesy and the main lyrical take-away is “talk dirty to me.”

When Epstein finally enters the conversation, friendly and chirpy in Idaho, where he’s currently enjoying a day off from touring, it makes for a startling contrast.

“That’s Warner Brothers for you,” he says pragmatically. Not that he’s complaining.

Fittingly, their sophomore album, The Speed Of Things, explores the pace of the modern world – the way ideas, feelings and trends transform at a moment’s notice.

That theme is all over the album, Epstein says.

“The song A Haunting is about a guy who’s having so much trouble connecting with his lover emotionally that he’s hoping his lover will die and come back to haunt him so he can actually feel things.”

Dark. But more practically (and less morbidly), the album also explores functioning in our internet-obsessed society. “You can find yourself lying on the couch next to someone and yet still check your iPhone. I don’t know if I’ll ever be able to watch a television show and not look at my phone.”

However modern their music – with its beautifully textured layers and poppy vocal harmonies – it’s rooted in the pre-internet age.

“I think what you listened to as a kid affects how you end up filtering music. Both of our parents played a lot of Motown, and it’s affected how we think about music.”

Detroit’s other music legacy, techno, also played a part in crafting their sound, although Epstein admits he initially didn’t quite get it.

“It wasn’t a music that I felt I truly understood. Then all of a sudden I had this moment a few years ago – it made sense to me and I started dabbling in some of the sounds.

“It’s great to be able to expand what you listen to and what you do as you grow. Otherwise, you would make the same things over and over again, and I never want to do that.”