NOW MagazineMovies & TVDan Harmon hates himself more than you do

Dan Harmon hates himself more than you do

After being fired from TV series Community (and pissing off star Chevy Chase), Dan Harmon took his Harmontown podcast – and all his personal and creative demons – on the road, connecting with a whole other community of misfits and geeks 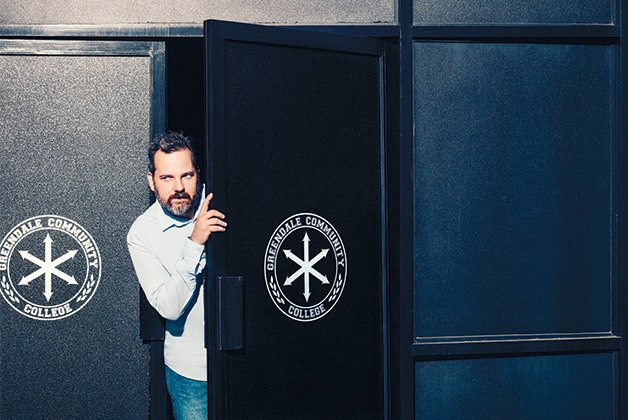 Dan Harmon is a cult figure who spends his Sunday nights actively building his own cult. You may not know his name – that’s how cult celebrity works – but his fans are legion.

Harmon is, among other things, the creator of the NBC sitcom Community, a show intensely beloved by a few million people. I am one of them. I think Community is as revolutionary a series as Mad Men or Breaking Bad, a magnificent whirligig comedy about a handful of people dealing with minor triumphs and major setbacks against the backdrop of a third-rate community college.

Capable of shifting between pitch-perfect movie parodies – a zombie outbreak for Halloween, paintball games that riffed on Die Hard and spaghetti westerns, an episode recreating My Dinner With Andre – Community has made cult stars of Donald Glover, Alison Brie, Danny Pudi, Gillian Jacobs and Jim Rash, and turned a tossed-off expression of faith in a faltering NBC series – “Six seasons and a movie!” – into its audience’s rallying cry.

“They’re smart,” Harmon says of his fans from his Starburns Industries office.

“They would love to be able to turn off their brains and watch a TV show and believe in it, but they’ve got a lot of brain to turn off, and you can’t turn it off with just blunt force. You can’t just take Dukes Of Hazzard for that active a mind and turn up the insipidness of Dukes Of Hazzard times 10 to compensate for the heightened scrutiny and skepticism of the people watching.”

Nothing about being aware of the human condition and of one’s role as a viewer, he says, automatically precludes enjoyment of something as harmless as TV.

“Smart people eat Snickers bars all the time – I’d wager more than dumb people,” he laughs. “A lot of dumb people are in great shape.”

Harmon’s scripts are idiosyncratic and nerdy and intellectual and obsessed with the images of ourselves we create so we can go out into the world. His characters are often flawed and broken and sad and weird, but they need love and self-assurance as much as their creator, who’s famously been fired from almost every job he’s ever had.

He shares a screenplay credit on the Oscar-nominated animated feature Monster House, even though the film barely reflects his intentions. Sarah Silverman let him go from The Sarah Silverman Program, a show they created together. And Community… well, that’s a whole other story.

Harmon created the show in 2009, and was fired from it in 2012 after a contentious third season that culminated in a public shaming match with co-star Chevy Chase. After a fourth season that looked and sounded like Community but clearly wasn’t, Sony and NBC rehired Harmon for season five – and suddenly the show was itself again.

What happened between season three and season five? Dan Harmon took his Sunday night show on the road.

A few years ago, he channelled his natural restlessness into a little cabaret thing in the back room of a Los Angeles comic book store with his girlfriend, Erin McGathy, and an old buddy, comedian Jeff Bryan Davis.

The point of the show was that there was no show, just a gathering of like-minded people who were planning to leave Earth behind and form a colony on the moon. It took its name from the proposed moon colony: Harmontown.

Harmontown is open to anyone. Audience members are pulled up on stage to contribute to the discussion Apple Store employee Spencer Crittenden became a regular when he offered to serve as Dungeon Master for an ongoing Dungeons & Dragons game.

“People in that crowd are people that have been told their whole lives, ‘Who you are isn’t good enough. Don’t talk about it, keep it inside, you weirdo, you freak,'” says documentarian Neil Berkeley. “I’ve met these kids. I’ve looked them in the eye. I’ve talked to them. That’s one of the reasons I did the movie. I wasn’t a Dan Harmon fan, but I met these 50 kids in this comic book store and I was like, ‘Man, people might hate this guy, but these kids love him. Why are they in this room? Why are they drawn to this guy?’ I was fascinated by it.”

Berkeley – who’d already captured an eccentric, egotistical talent in Wayne White: Beauty Is Embarrassing – was hired to tag along with Harmon on a 20-city American tour in January and February of last year.

The result is Harmontown, a compelling and totally involving record of the trip.

Like Community, it’s the story of misfits forming a makeshift family under odd circumstances – in this case a tour bus bouncing from one comedy club to the next. And like Community, it walks a fine line between barbed laughter and painful emotional authenticity as a flawed hero struggles to accept the idea that he’s worthy of the adventure happening to him.

“It’s a fair portrayal of me, and an honest one,” Harmon says. “And part of the portrait of me is how I treat other people, especially the people closest to me.”

Harmontown’s depiction of his relationship with girlfriend McGathy, he says, was particularly difficult to watch.

“It was super-weird for Erin and me,” he says. “Erin has this overwhelming concern that people are going to think she puts up with more shit than a woman should, that she’s in a relationship with an asshole, that we’re not depicted as the Bonnie and Clyde of each other’s joy that we are in real life. That it doesn’t look like this beautiful, symbiotic, creative relationship where we are each other’s muses and make each other laugh. But it is an accurate glimpse of the day-in, day-out mechanics of our relationship, especially when we’re under stress. So it’s very, very strange to see it on screen.”

Berkeley’s camera sees a very real love but doesn’t ignore the tension inherent in the relationship. One of the shows finds McGathy and Harmon feeling their way through a reconciliation onstage after a particularly rough fight the night before.

“She has the burden of bringing all the warmth into our relationship,” Harmon says with a weary laugh, “and I love her for it. That’s what she is to me, and it is how I feel – but she knows how to express love more than the average person, and I don’t know how to express it as much as the average person. I think it’s a good combination, but also I think it might wear on her sometimes.”

Thankfully, there’s a happy ending to all this: Harmon’s rehiring for Community’s fifth season, which ended earlier this month. At press time, NBC hadn’t renewed the show, but Harmon figures there’s a 50/50 chance he’ll get that once-improbable sixth season. And if not, well, he still got his show back on his own terms.

“There’s a scar tissue [from the firing] that now can’t be penetrated ever again. I’ve got that Lorne Michaelsy kind of validation that comes with leaving a show and then being brought back to it,” he says, referring to the legendarily dire 1980 season of Saturday Night Live produced without its creator at the helm.

“And so it did pay off in the long run, wearing my heart on my sleeve and always being honest with everyone around me, and always being most honest about how I’m sure I’m not the greatest guy for the job. And I think, you know, some rich people made the mistake of hearing those words and instead of saying, ‘Jeez, this guy is awfully honest. Maybe we should be honest, too, and we should work together,’ they said, ‘Jesus Christ, I would never say anything like that because I’d get fired if I did. Let’s fire him.’

Dan Harmon on casting himself as the villain of his own story:

Harmon on being forced to watch himself make fun of his girlfriend on-screen:

Harmon on why Community connects with TV-savvy viewers:

Harmon looks back on what he achieved with Community:

Harmon on where he thinks he is on his own hero’s journey:

Harmon on what he’s trying to do with his other show, Rick And Morty:

Neil Berkeley on why he followed his Wayne White movie with a Dan Harmon movie:

Berkeley on why Dan Harmon’s fans love him:

Berkeley on Harmon’s level of involvement with the documentary: