The lesson of the late NDP MP's political obstinacy was clear: identify your base and just keep organizing your heart out 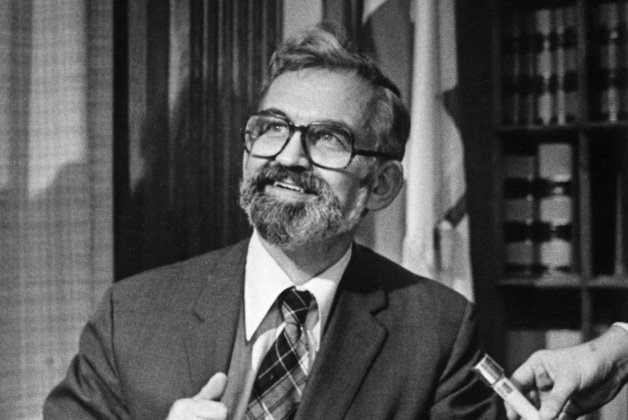 It’s not fashionable to use the word nowadays, even in the party he devoted his life to, but former NDP MP Dan Heap, who died Friday, April 25, was a socialist.

For over three decades, his no-nonsense share-the-wealth theology and pacifism elevated activism and gave texture to the social change cause in this city – a legacy that endures to this day.

As an ordained Anglican priest, in the Social Gospel tradition, he had an urgent mission to build the kingdom of God on earth, and he and his wife, Alice Heap, who died in 2012, crafted out of this a way to live with extraordinary meaning.

The bicycle-riding theist with the oversized glasses and an ever-present beard was no warm-and-fuzzy. He was stubborn to a magnificent degree.

He ran federally in Spadina in 1968 and lost. And a few years later made a provincial bid, again without success.

Despite the fact that he was an Upper Canada College graduate, he worked for years in a box factory, believing, like many socialists of his generation, that to represent the working class you had to share their life struggles. In his early campaigns, he branded himself a “worker-priest.”

In 1972 he was elected to city council in the old Ward 6, and in 1981 took the federal seat for Spadina. Pierre Trudeau had appointed former MP Peter Stollery to the Senate to make way for the PM’s lieutenant Jim Coutts in that riding, but Heap neatly foiled that plan.

One long-time NDPer quipped at the time that the PM elevated Stollery just so Heap would have to buy a new suit. Fashion was definitely not his thing.

The lesson of this political obstinacy was clear: identify your base and just keep organizing his heart out on every matter you care about. He served in the House until 1993, and never forgot he was there at the behest of the grassroots.

Dan Heap deepened the way I saw politics. I worked on his campaigns and served on the Ward 6 NDP executive, but all that seemed less important than what I learned sitting in the living room of his house on Wales Avenue in Kensington Market.

He and Alice built the riding association along parish lines – in the best sense.

If someone needed consolation after a loss, care for a sick loved one, babysitting or baby clothes, the Heaps took to their prodigious Rolodex to find a communal solution. Their grand but definitely unstylish Victorian house harboured those without shelter and fed the hungry. Socialism in one riding.

Once, they asked to borrow the beloved Volkswagen van I shared with my partner to go out of town. We would never have refused. That was how things worked in the Heap soviet. Too bad the van’s aging generator blew on the trip.

By the same token, though, their political organizing was hardcore ruthless. Alice would soften the blow by serving lasagna. But once in the circle, expectations were high. Both were deadly serious about changing the world, and so you darned well better phone the list they’d given you or set up that meeting, because the poor of the planet couldn’t wait, and wars were raging.

Dan – or Don, as Alice called him and he preferred – wasn’t a politico of rhetorical flourishes he had a slow, deliberate way of talking, with eyes that hyper-focused on his listener. He was an impatient man forced to patience. Sometimes, as all who worked with him knew, he couldn’t avoid storms of temper. It’s daunting to think the issues we face today are the same ones he tackled so ferociously.

As Immigration critic, he pushed for justice. As a pacifist, he opposed U.S. militarism and Canadian participation in the Western war machine, campaigning to end NATO flights over Innu territory in Labrador – a major issue in the 80s. He was part of a group in the party urging Canada to leave NATO, an issue the NDP has not dealt with well (though Jack Layton, in grand Heap style, brilliantly opposed this country’s intervention in Afghanistan).

A co-founder of Homes Not Hostels and the Toronto Disaster Relief Committee, Heap was arrested in 2000 with two others attempting an act of conscience: removing the sword from the cross outside St. Paul’s Anglican Church, to push the Church to oppose unjust wars.

It’s no accident that Olivia Chow, once his constituency assistant, hailed him this week as her mentor. She and Layton built on the social base Heap created in the Spadina area. They occupied that space between activism and parliamentary efficacy that the Anglican priest so deftly pioneered. If you listen closely to Chow today, you can hear echoes of the Heap influence, as in her inspired speech a few months back at the Bain Co-op anniversary where she celebrated communities that made a habit of sharing.

At party conventions, Heap always supported resolutions in favour of what used to be called social ownership – the belief that the resources of the country should be used for the public good. It feels like an antiquated notion these days, when the conservative ethos has constrained so much of our thinking, and NDP strategists heed U.S. Democratic Party theorists and tap populist anxieties rather than sticking to egalitarian basics. This is purported to be a dexterous and necessary way to expand the party’s vote share beyond its core base, and it either works (see Nova Scotia) or it doesn’t (see also Nova Scotia).

I don’t know how the former MP would have viewed all this. For the last several years, he tragically lacked the capacity to weigh these developments because of his Alzheimer’s, and we are all the worse for it.

But his sad passing has left lots of us out here wishing there were more Heap-ism in our politics and in our everyday affairs. A life of meaning and a shared mission – there’s no greater bequest than that.

“I knew Dan for 30 years and was always impressed with his ability to slice through BS. Whether as an MP advocating for refugee rights, a fellow arrestee blockading Bay Street or pouring blood on the steps of the legislature to protest Jim Flaherty’s killer cuts under the Harris regime, he was always searching for new ways to transform our social institutions. Both he and his wife, Alice, never failed to listen to those far younger and less experienced than they. It only came up accidentally in conversation once that Dan had joined marchers responding to Dr. King’s call to go to Selma in 1965. In our last conversation, he said Canada would never be a worthy nation if it did not deal honestly with its ongoing colonial crimes against First Nations. He was a real truth-seeker.”

“First time I voted for a winning candidate was for Dan Heap, and I was thrilled because Dan Heap was the real deal. He believed in the Social Gospel of the common good. He fought for the rights of those on the margins. Dan Heap walked the walk, and countless young activists followed.”

“Dan Heap was absolutely fierce in his commitments – sometimes to the point of being frightening in his dedication. Dan insisted on taking these values into the public square and never giving up. We may not always win – and sometimes we don’t even win very much at all – but Dan reminded us that if we don’t try we will surely lose every time. Dan’s lifetime of engagement started with a simple but thoroughly radical proposition formed out of his Christian (and decidedly Anglican) faith that every single person matters.”

Michael Shapcott, director of housing and innovation, the Wellesley Institute

“In the early days there were few politicians we could rely on. Dan was one of them. He often challenged us to reach beyond our “issue” to take on other causes. He left us better because of his work and example.”

“Dan Heap was a man of faith and action. He lived a life based on the principles of social justice. I will forever be indebted to him for inspiring me to get involved in politics and make a difference.”

A funeral mass and memorial service with a sing-song to follow will be held at the Church of the Holy Trinity (10 Trinity Square) on Sunday (May 4) at 2 pm.