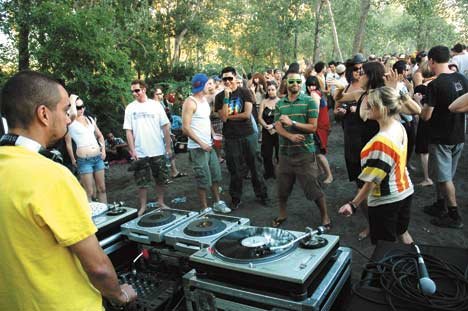 The weekly Sunday afternoon free parties thrown at Cherry Beach are one of Toronto’s most colourful institutions, and enjoy fairly unique relationship with the city in that they have official permission to blast beats all summer. In return, the organizers hire security and ensure that the space is left clean at the end of the day. Why isn’t it always this simple to throw a public event in Toronto without wading through miles of red tape?

It wasn’t always like this. Back in the mid-90s, many promoters would lug out generators and sound systems all summer long, and most weekends you could head down to the lake after the clubs closed and find something going on until the break of day. Some Saturdays there might even be two separate parties happening at either end of Cherry Beach, and it seemed like they were tolerated by the cops for the most part.

As they became more popular, though, noise complaints from Ward’s Island sent the authorities down there more regularly, and instead of just telling them to turn it down a bit, the cops started to shut the scene down.

The idea got a new lease on life when promoters finally figured out you could get away with some fun if you didn’t disrupt anyone’s sleep, and a new tradition was born. The Promise crew got inspired by this solution, and in 2002 started throwing free DJ parties every Sunday, which got bigger and bigger as word spread. Unfortunately, media attention sparked a crackdown that culminated in a bizarrely disproportionate police response one afternoon at the end of the summer of 2006 that seemed like the end of the road.

Instead of giving up, organizers Irving Shaw and David Macleod approached Counsellor Paula Fletcher and managed to get a permit to hold the event, and so it continues today. The DJs are usually local and typically span a wide range of styles and genres. Occasionally, bigger-name performers show up the day after their official club gig in town, but there’s no need of a big headliner to get people to come out. The vibe has changed some since the early days, but it’s still pretty chilled out and friendly.

While the weekly parties are technically free, the organizers do ask for donations to cover the cost of security and the sound system. They take very seriously the need to keep the beach clean, and you can expect dirty looks from other partiers if you bring glass bottles or leave garbage behind. So if you head down there, behave yourself.