>>> With Atrocity Exhibition, Danny Brown has crafted his most vividly emotional and demented album

If anyone can capture the thrills and the terror of getting high, it’s the Detroit rapper 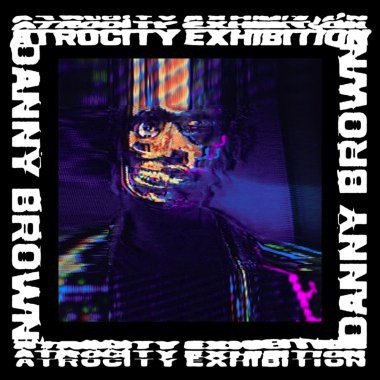 Cocaine is a hell of a drug. If anyone can capture the thrills and the terror of getting high, it’s Detroit rapper Danny Brown. Listening to the sludgy opener on his fourth album, you imagine him stumbling around a decaying basement couch in a wayward bathrobe. The song’s entitled Downward Spiral, and the lyrics (and title) pretty much paint the picture. “And if I learned anything,” he raps. “Is don’t nod off with ya motherfucking cigarette burning.”

From there, Atrocity Exhibition proceeds to burn down the couch. Named after a Joy Division song title (borrowed from a J.G. Ballard book), the album chronicles a descent into fame-fuelled depression and self-medication. Brown has been in this territory before, but whereas a banger like Smokin’ & Drinkin’ (from 2013’s Old) masked his pain with an adrenalized club beat, Atrocity Exhibition largely snubs conventional production and flow patterns in favour of weirdo riffage, dirgy bass and palpatating beats. There are exceptions, like the strip cluby Pneumonia, but even a potentially frivolous moment is overcome with erratic, clanging noise.

The snarling bass and tribal sample on Dance In The Water sound like something off a Brazilian post-punk comp single When It Rain nods to classic Detroit dance music White Lines is cute and catchy and totally crazy and Tell Me What I Don’t Know nods to John Carpenter horror synths. Meanwhile, Kendrick Lamar, Ab-Soul and Earl Sweatshirt show up on Really Doe for a classic late-night cruise around the block. In the album’s final -moments, Brown unwinds with chilled-out assists from Kelela and B-Real.

Working mainly with producer Paul White, Brown has crafted his most vividly emotional, demented and personal album. His flows are as manic and snarling as ever, but as he raps about gobbling drugs, he is voraciously devouring genres. Thematically he might travel into dark and desperate places, but the idea that one can find salvation in music is made vividly real by the rush of energy that is Atrocity Exhibition.