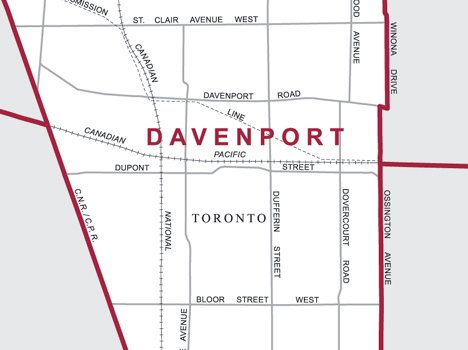 Just over half (52 per cent) of the population are immigrants. In terms of education and employment, the riding does not fare well. Just under 60 per cent of the adult population has no post-secondary diploma, at 7.3 per cent unemployment is nearly a point higher than the rest of the country, and 30 per cent of children in the riding are classified as low-income. Davenport’s median annual income is $21,014, well below the national median of $25,615. Sales and service occupations are overwhelmingly the main source of employment, with trades, transport, and equipment operations coming in second.

The riding has been held by the Liberals since 1962, and incumbent Mario Silva beat his NDP rival by a solid 5,000 votes in 2008. Andrew Cash is a rookie candidate for the NDP this and is looking to make the race a little closer. Davenport is also the home riding of Miguel Figueroa, leader of the Communist Party of Canada.

(Conservative candidate Theresa Rodrigues did not respond to our questions.)