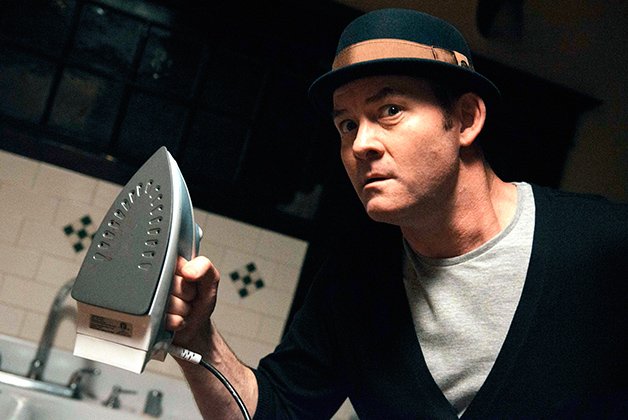 David Koechner is one of those guys who’s been in everything. You may remember him best for his work alongside Will Ferrell, Paul Rudd and Steve Carell in the Anchorman movies, but he’s racked up credits in dozens of films and TV shows, from a season on Saturday Night Live to a recurring role on The Office as travelling salesman Todd Packer. (He was also surprisingly convincing as a doomed asshole in Final Destination 5.)

In Cheap Thrills, Koechner gets a chance to do something different. E.L. Katz’s indie thriller – a crowd- pleaser at last year’s SXSW film festival – casts him as Colin, a wealthy husband who enlists old friends Craig (Pat Healy) and Vince (Ethan Embry) in a creepy series of escalating dares to entertain his much younger wife, Violet (Sara Paxton).

Alternately cheerful and malevolent, Colin is like the world’s creepiest game show host – though, as he explains over the phone from Minnesota, Koechner didn’t think he was playing for comedy.

“I didn’t know there were that many laughs in the film,” he says. “I thought, ‘A few parts, a little bit,’ but we certainly weren’t going for any laughs. But you watch it with a crowd and [people laugh]. I figure it’s because it’s such a pressure cooker, they need a release.”

The set was something of a pressure cooker as well, with a 14-day shooting schedule and two primary locations.

“Honestly, it felt like we were doing a play,” he says. “Those guys are all such good actors – Sara and Pat and Ethan, man, we were in it. The first day, it felt real. You’re pulled in. It’s the best when you’re actually feeling something and it’s your turn to speak. You’re really being affected, which doesn’t always happen.”

Koechner will come back to the funny in next month’s No Clue opposite comedy buddy Brent Butt, whom he’s known since they gigged together in Montreal and Toronto in the mid-90s.

“It’s a fun film,” Koechner says of No Clue. “It’s a detective story, but he’s a goofy guy, not really a detective. And I’m his buddy, who’s nagging him about it the whole time. I just love his style, and he’s such a funny guy – plus, you know, he’s a Canadian treasure.”

Personally, I want to know whether Koechner will reprise the role of Greg Sutter, the Florida lawman he played on the first episode of Justified this year, who seemed to have the potential to do more stuff than just shoot the breeze with Timothy Olyphant’s taciturn Raylan Givens.

Koechner on watching the Anchorman phenomenon happen from the inside, and the reunion for Anchorman: The Legend Continues:

Koechner on what we can expect from the Anchorman: The Legend Continues DVD: