You know youre at an A-list music festival when bands like Future Islands and The Tragically Hip are relegated to. 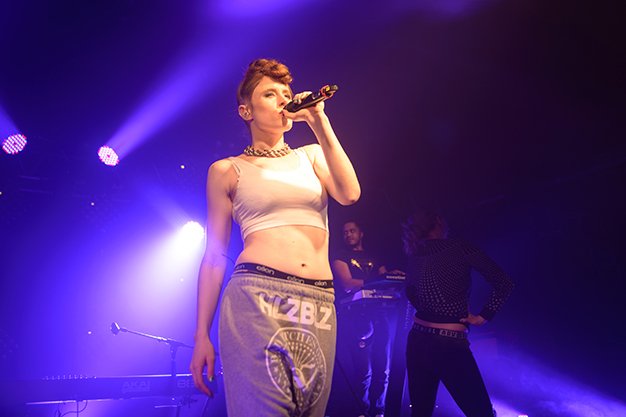 You know youre at an A-list music festival when bands like Future Islands and The Tragically Hip are relegated to the finer print on a poster. But for Festival DEte in Quebec City, thats the case when you have bold print names like The Rolling Stones, Foo Fighters, Nickelback, Iggy Azalea, Keith Urban and the Diplo-and-Skrillex abomination, Jack U, headlining.

Over the course of 11 days, downtown Quebec City becomes a musical mecca, where indie bands play in front of ornate water fountains and dubstep fills historical parks. Streets are blocked off and the hilly Plains of Abraham transform into a sea of flashing red lights thanks to the signature LED light-up pins that festival-goers don every night.

For the first day of the festival, I stuck to the main stage where Skrillexs second-annual Full Flex Express was stationed for the evening. Because at the ripe age of 26, its about time I finally saw a dubstep show first-hand.

Here are four stray observations from my first day at Festival dete.

1. Tycho is too mellow for the dub-loving teens.

San Francisco-based Tycho (AKA Scott Hansen) makes beautiful ambient music that sounds just like how you want summer to feel. Joined by a full band, Hansens warm synth lines swim around sunny guitar melodies and samples that seamlessly emerged and disappeared. It was the perfect kick-off to my festival experience and a total bust for the kids already in the front row waiting for Jack U. Although Tycho seems like an odd fit for Full Flex Express their music is much mellower than the tourmates they hold their own alongside the dancier acts.

Hailing from Calgary, Kiesza continues her campaign to become the countrys next big pop star. Judging from last nights set though, she has some work to do. She has an incredible pop voice and cool dance moves choreographed just enough that her live presence is interesting without going overboard but her songs lack the most important element: a hook. The only standout in her 25-minute set was hit single, Hideaway. I want you to succeed, Kiesza, but you need to get some catchier songs stat.

3. A crazy laser show cant even save Jack U.

Jack U is the partnership between DJs Diplo and Skrillex. And theyre terrible. Their hour and a half set was filled with exactly what you would expect from the EDM superstars: thumping bass, drops seemingly every two-minutes, a clusterfuck of samples ranging from Kanye and Sum 41 to snippets from the Lion King. Lasers shot out from the stage and into the 90,000-strong crowd like tentacles as columns of smoke puffed from the stage at well-timed intervals. The DJs would take turns at the tables, twisting their knobs and grabbing oversized headphones, while the other would either a) jump on the table and fist pump or b) ride around the stage on handle-less segways whilst waving the Quebecois flag. In one particularly cheesy moment, Skrillex pretended to be dead on the table and the only way to bring him back to life, according to Diplo, was by cheering really, really loud. It felt like a schtick a high school DJ would pull.

Its not that Im not against club bangers, but 30 minutes into Jack Us set, I was genuinely bored. Their musical formula is repetitive and you can only revive a band member once. (They pulled the same gag later on, but this time, it was Diplo that needed to be resuscitated).

4. But teenagers are fantastic and I wish I was 16 again.

Since the majority of the shows are outdoors and all-ages unlike club-based festivals like the nearby Pop Montreal the festival contains an exorbitant amount of hyperactive teenagers. My favourite person was a 14-year-old brace-faced boy who was wearing a shirt that said, Step aside coffee. This is a job for alcohol. And if it wasnt for the teenagers going absolutely crazy for Jack U, piling up on each others shoulders, head banging and moshing, I would have been so tempted to leave early.