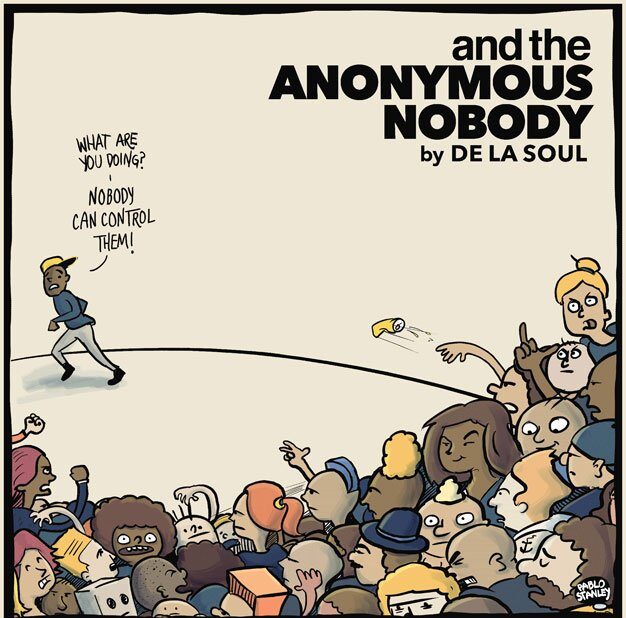 De La Soul’s 1989 debut album, 3 Feet High And Rising, is inarguably one of the most influential albums in the history of hip-hop, but the genre has reinvented itself countless times since then. And The Anonymous Nobody… is their first album in 12 years, and it finds the Long Island trio wrestling with honouring their considerable legacy and reasserting their contemporary relevance. This results in some unexpectedly pleasant surprises, some less successful experiments and just enough nods to their classic sound to satisfy long-time fans.

Nobody was funded through an extraordinarily successful Kickstarter campaign that raised more than five times the original goal of $110,000. The windfall allowed them to record hundreds of hours of instrumental tracks with their tour band, the Rhythm Roots All-Stars, to then chop them up into grooves, thereby avoiding the licensing issues that have made their original sample-based production style impossible. The approach also gives the more left-field moments on the album some sonic continuity, while still evoking their trademark sound.

The extra cash also likely enabled one of the weaker aspects of the record: an overreliance on collaborators. Snoop Dogg’s appearance on Pain works better than much of his own current material, and David Byrne’s crooning on Snoopies is the right balance of quirky and soulful. But other guests are out of place and overpowering. Lord Intended inexplicably features the Darkness’s Justin Hawkins, and the wailing hard rock guitars quickly wear thin. Little Dragon’s turn on Drawn is decent enough but sounds more like De La Soul guesting on one of their tracks.

Usher’s vocals on Greyhounds work better than you might expect. 2 Chainz dropping in on Whoodeeni is another odd choice that almost works but lacks a strong hook. Here In After featuring Damon Albarn is more like a Gorillaz song featuring De La Soul. Still, it’s nice to hear De La Soul stretching themselves creatively, and even the less successful detours are interesting additions to an already eclectic catalogue.