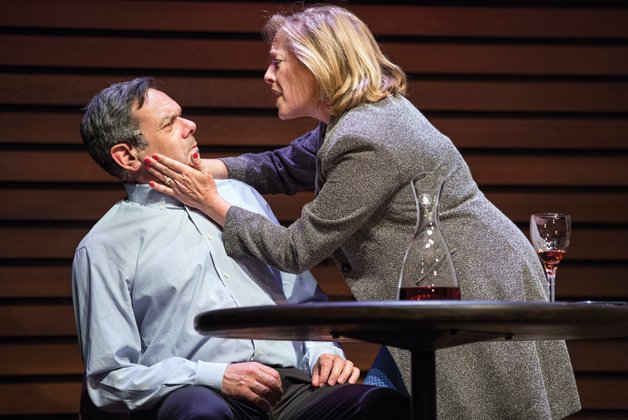 George F. Walker’s latest, the story of an unemployed sniper, delivers its scathing critique of veteran services and partisan politics with the subtlety of a shotgun blast. The strong ensemble makes Walker’s signature high-octane dialogue and blue-collar perspective intense, disturbing and hilarious in its utter absurdity.

Dean (Noah Reid), a sharpshooter recently returned from duty in Afghanistan, has a pregnant wife, Jenny (Haley McGee), and no civilian job prospects. So he moves in with his elderly parents, Frannie (Nancy Beatty) and Hank (Eric Peterson), and begins visiting Oliver (Michael Healey), a career counsellor. Oliver finagles a job for Dean as a staffer for his wife, Helen (Julie Stewart), a ruthless conservative politician running for office. When the campaign gets ugly, Dean’s sniper skills quickly come back into focus.

Walker explores the social, psychological and structural pressures on soldiers struggling to make the transition to civilian life with only military training and experience. Frustrated, Dean considers returning to active duty, where his skills are in demand, but Jenny threatens to leave him if he continues to be so cavalier about their family’s future.

Peterson’s Hank emerges as the breakout character. Suffering from some form of dementia similar to Alzheimer’s, the old man has a habit of speaking his mind to anyone anywhere in searing strings of expletives – displaying Walker’s talent for colourful language. Peterson nails these outbursts, one of which, directed at Helen’s political hypocrisy, proved such a slam dunk at the performance I saw that it inspired a sustained round of applause. Another had people gasping, “Did he just say that?”

Healey’s transition as Oliver is also fine. At first he’s a boring career bureaucrat, a left-leaning foil for his wife’s superficial Tea Partyesque positions. But Oliver becomes more interesting in the second act when the pace and stakes ramp up, devolving into a desperate, paranoid mess.

Walker’s direction dials up the fiery back-and-forths, pushing them beyond realism whenever he needs to his message to be clear. He doesn’t just hit the bull’s eye – he takes out the entire target.