No corpse paint? No problem. Whether they wanted to or not, the San Francisco black metal band are forcing us to rethink a genre. 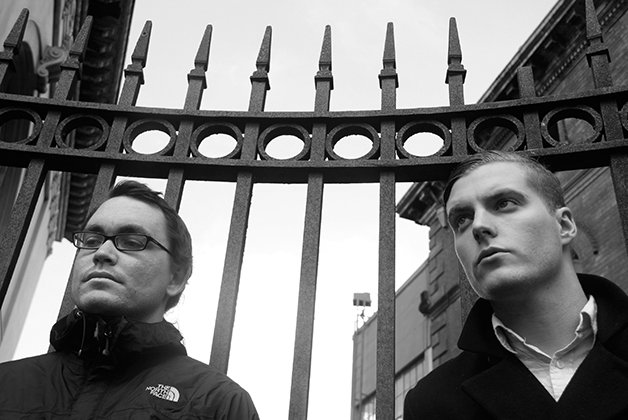 It’s the sort of record that can blast a band like this out of the sleazy musical ghetto of “top 40 metal albums” lists into straight-up “best albums of the year” compilations by staffers at Pitchfork, Consequence of Sound, NOW and the like. 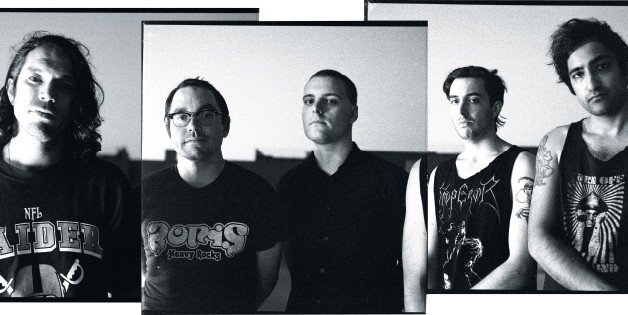 “It was very flattering,” says George Clarke, the band’s lyricist and screeching vocalist, over the phone from his home in San Francisco. “Certainly the attention we got last year, and we’ll continue to get this year, is unexpected. We’re very grateful. It took me by surprise more than anything.”

Clarke’s surprise echoes that of many critics.

Deafheaven’s debut, 2011’s Roads To Judah, received smatterings of praise from inside the metal press, topping some charts of that year’s most “extreme” albums.

Knitting together Clarke’s anguished black metal vocals (think Krusty the Klown screaming as he plummets through a vortex) with the band’s expansive post-metal compositions and shoegazing fuzz had all kinds of promise. What’s remarkable is how quickly the band made good on their potential follow-up Sunbather is an unqualified masterpiece. It’s been like watching a kid go from capably knocking two-run grounders off a tee to sending dingers straight over the fences overnight. 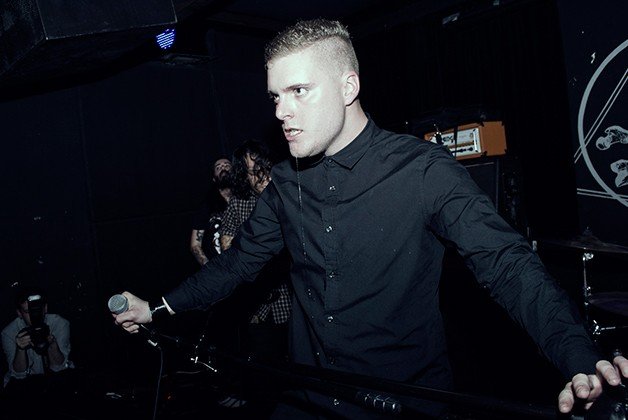 “I just knew that Sunbather was going to be not necessarily important in the scheme of music and all that, but certainly important to us,” Clarke explains.

“I think we wanted to prove to ourselves that we could write a better record than Roads To Judah. I didn’t know if we were going to succeed, but we really wanted to push ourselves.”

But not every metalhead was pleased. 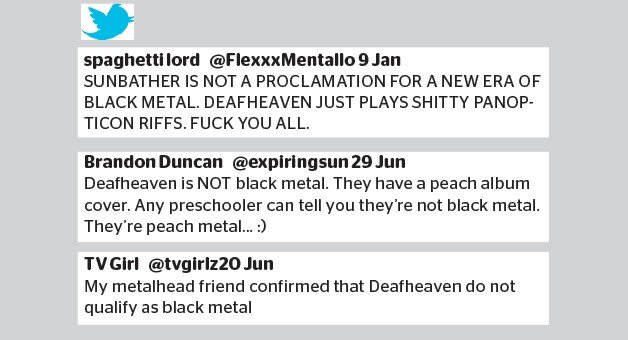 “People are sensitive about that thing,” says Clarke. “It’s weird to see adults do it. I remember being 14 or 15 and having arguments about what was quote/unquote ‘legit.’ I literally couldn’t care less any more.”

This intense emotional investment in defining legitimacy (and pointing a finger at its opposite) applies a hundredfold for black metal fans, who have their own private language of insider appreciation. Terms like “troo” (i.e., “true,” meaning it’s the real deal) and kvlt (i.e., “cult,” used to refer to the purest forms of sub-sub-sub-underground music) are tossed around to signify a given album’s or artist’s authenticity.

The Norwegian black metal subculture adopted the shock-value Satanism of 80s heavy metal in earnest. Adherents slathered themselves in chalky white “corpse paint,” snapping themselves into spiked gauntlets and belts like grim combatants armed for a war against everything.

“You don’t perform black metal if you’re not a warrior,” says Gorgoroth vocalist Gaahl in the 2007 Vice-produced web series True Norwegian Black Metal. “Black metal is a war against what everyone knows.”

The music cranked up the treble, accentuating the wailing vocals and rapid double-bass drumming (called “blast beats”). The records were cheaply produced and comically lo-fi. The guiding philosophy was staunchly anti-Christian – to the point of criticizing the Church of Satan for being too benevolent.

Some members of these bands were implicated in serious crimes including a string of church burnings and even murders. Emperor drummer Bård “Faust” Eithun stabbed a gay man to death in a forest outside Lillehammer in 1992. A year later, Varg Vikernes (aka Burzum) murdered Mayhem guitarist Øystein “Euronymous” Aarseth, effectively displacing him as the scene’s most notorious figure. This helps explain why a 2007 British documentary on black metal called the genre, rather uncharitably, “Murder Music.”

This is music with a troubling history. And its trickling into the mainstream raises all kinds of ponderous, sometimes troubling, questions.

For his part, Clarke doesn’t really want to talk about it. At least not in a brief phone interview. “Getting into the whole NSBM side of things could be an entire conversation,” he says. “A long conversation.”

In The Complicated Appeal Of Black Metal, published on BuzzFeed in August, Jessica Hopper snarked at the “hipster obsession with transgressive scenes,” calling it “cultural tourism” for fair-weather fans who wrested black metal away from the troos and kvltists.

At the same time, she provided a step-by-step guide for late adopters, connecting the dots between bands like Burzum and Weakling and slacker standbys like Slint, Sonic Youth and My Bloody Valentine – a hipster-friendly how-to for precisely the folks she was criticizing.

That clichéd idea of hipsters “co-opting” (as opposed to unironically, naively enjoying) black metal assumes that the entire genre – which takes plenty of forms that reject the ideological nastiness of its origins – has nothing to offer beyond the cool thrill of frivolously dabbling in Satanism and xenophobia.

The lengths to which some black metal listeners will go to avoid any active participation in this ugly past are hilarious. The BuzzFeed article describes a fan who will only buy bootleg Burzum shirts on eBay so no money goes directly into the artist’s pocket. Me, I once followed a loose rule of only listening to records Burzum recorded in prison, as if Vikernes’s ostensible atonement could substitute for my own.

It’s not just black metal, though. The long conversation concerns the broader moral gymnastics people perform to justify liking a bad or immoral thing. Look to the conversations around R. Kelly. Or Woody Allen. Or Roman Polanski. Or anyone else whose moral reprehensibility we shadowbox with so we can enjoy the art without having to feel bad.

The thing is, though, you probably should feel bad.

That, at some level, black metal offers a confrontation with its crueller connotations is one of its great virtues. This is expressed in the music’s incomprehensible howling and atonal guitar squawks.

Its violence confronts us with the constantly suppressed idea that maybe we’re not good people who deserve good things, who should inherently feel worthy of our own esteem. 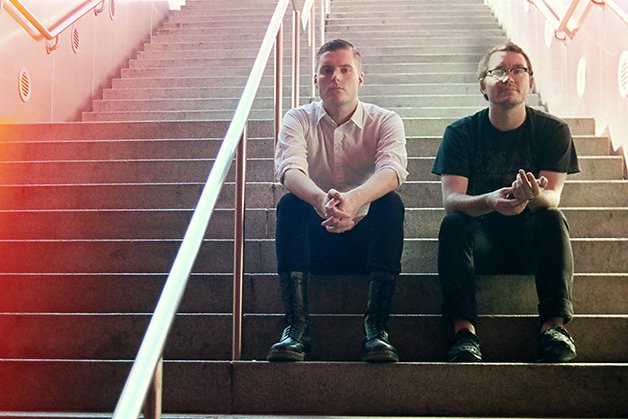 It reminds us of what we’re trying to forget.

This is what makes Deafheaven’s music beautiful. Clarke and co-founder/long-time BFF/lead guitarist Kerry McCoy place this sorrow and cruelty in a totally different context.

When Clarke’s wails pierce the gathering storm of McCoy’s layered guitars on Dream House, they split the track wide open. “Musically,” Clarke explains, “the vocals act like an instrument. They’re lower in the mix their purpose is to build intensity. They’re sort of the rock in the centre, while the guitars move around it. They help increase the emotion.”

Clarke’s pain through the splendour turns it into torment. It’s a reminder that beauty is sometimes just an asylum from anguish. It’s reverse catharsis.

Clarke seems bored with Deafheaven’s being constantly discussed in the context of whether or not they’re troo, kvlt, black metal or whatever. “I choose to create music and not worry about the proper definition,” he says. “It’s too tiring to get into the details of it all.”

Tiring, sure. But whether they like it or not, their music stages the ideological conflict between beauty and ugliness, the tension that constitutes whole spheres of politics and culture, that makes up who we are.

They may be painstaking about their production – about as far from black metal’s no-fi roots as possible. They may prefer pilled flannel and Funeral Pyre T-shirts to spiked girdles and corpse paint. They may be both black metal and not.

But in this way they figure directly in the history of a genre that stands precariously atop its values of rejection, of being defiantly your own thing in a world that often demands the opposite.