Death Married My Daughter, Business As Usual and Ralph + Lina

RALPH + LINA by Ahuri Theatre, DEATH MARRIED MY DAUGHTER by Play It Again Productions and BUSINESS AS USUAL by. 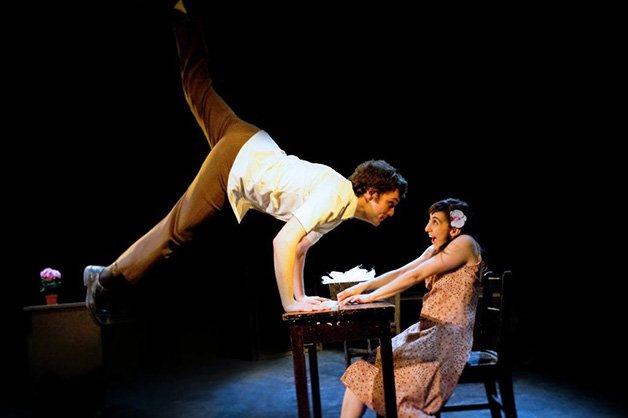 That’s the math for the shows presented by the Independent Creators Cooperative, made up of Ahuri Theatre, Play It Again Productions and ZOU Theatre, whose members all have a strong basis in physical theatre.

Brought together as an experiment in mentored producing and long-term development, the companies will continue developing their productions during the six-week run, a gift for young indie troupes.

Even now there’s lots to admire in the three shows, beginning with the delightful Ralph + Lina, written by director Michele Smith and performers Dan Watson and Christina Serra.

Based on the story of Serra’s grandparents, the show follows the growing romance in Italy of Ralph and Lina. He proposes and she accepts, but the Second World War intervenes Ralph disappears for seven years, first to fight and then interred in a labour camp. Lina is forced to accept another’s proposal just before Ralph returns. Her solution to wedding the partner she prefers involves a trip to Canada.

Watson and Serra play the commedia-style slapstick and quick changes with zest and vibrant energy, turning a reading of the newspaper into a battle that then becomes a passionate dance. Watson plays both suitors with a few clever shifts of voice and body, while the supple Serra is always a pleasure to watch, whether gorging on a sandwich or becoming increasingly hysterical when she doesn’t hear from Frank.

The scenes in which Lina travels to Canada and Frank sees his daughter for the first time aren’t yet focused, but that will come with performing. The big family Christmas that ends the show brings a resonantly happy conclusion.

Death Married My Daughter, created by performers Danya Buonastella and Nina Gilmour with directors Michele Smith and Dean Gilmour, has grown since last summer’s Fringe. This version is tighter, more succinct and has an added drop of acid along with its humour, which is perfectly fine given that the two characters are bouffon figures, dark-edged clowns who tease and send up viewers while entertaining them.

You’ll know them both: Shakespeare’s Ophelia and Desdemona, back from the dead to bring closure to their unhappy lives. Targeting men in general and patriarchy in particular, they skewer their respective plays and do the same, literally, to some boy dolls, intentionally objectify themselves for the male gaze and satirize right-wing commentators like Ann Coulter.

The last part of the attack goes on longer than needed – the point’s made repeatedly – but the show now has a clear structure and two well-honed performances.

Set in a corporation where everyone works far more than eight hours a day, the acrobatic action looks at a succession of suicides in a world where anger and tension are relieved by aggression, one-upmanship and lines of coke. If those things don’t work, there’s always the short walk off a high ledge to bring release.

Balancing mimed sections done to up-tempo music with sharp-edged dialogue, the three actors convincingly evoke the workers’ stress. Ken MacKenzie’s set of three movable windowed walls, lit eerily by Andre du Toit (who designed lighting for all three shows) is a plus. Still, the action feels repetitious until the last third, where the boss – who turns out to be a big baby – tells his two workers, both named Johnson, to call their wives and explain they won’t be home until Christmas. The work builds from here, with the boss (a fearsome Lukawski) displaying scary domineering tendencies of various sorts.