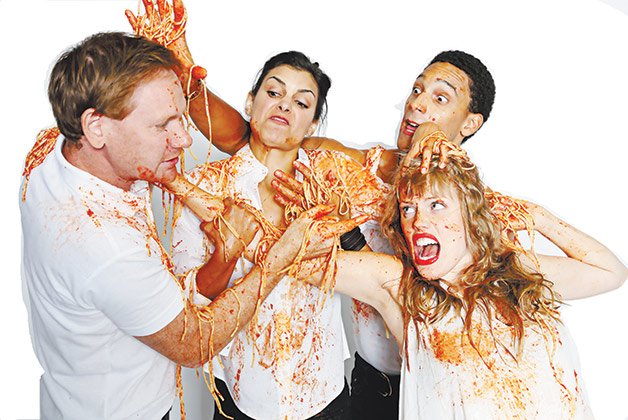 In Fringe hits like Help Yourself and LOVESEXMONEY, Kat Sandler has proven she knows how to push societal buttons. Her new play, Delicacy, does more of the same, challenging our ideas about class, sex and condo culture.

Young professionals Tanya (Tennille Read) and Mark (Andy Trithardt) live in a downtown condo that is tasteful and attractive, if a touch sterile. The same could be said of their marriage, which gets tested when their invited guests arrive, cheap magnum of wine in hand.

The kicker? The guests are Colby (Kelly McCormack) and Len (Kaleb Alexander), a younger, mixed-race suburban couple they met at a swingers club, who’ve come for an encore performance.

Sandler’s clash-of-cultures premise feels a tad contrived (the obvious model is Yasmina Reza’s God Of Carnage), but it nevertheless pays off with some savagely funny one-liners and sharp observations. Look how subtly Len gets under Mark’s skin when the subject of the latter’s job – he’s a writer – comes up, or how playing a simple game reveals telling details about each character’s life.

Sandler nails many cultural references, from the charcuterie the couple serves to the HBO shows they disagree on. I wish there were more suggestions about what initially drew Tanya and Mark together in the first place a more nuanced performance by Read would help.

But Sandler, who also directs, gets fine work from the rest of the cast, and the white-on-white set she’s created with Alain Richer says a lot about characters who don’t like to make a mess.

It’s definitely a show that’ll get you talking afterwards.