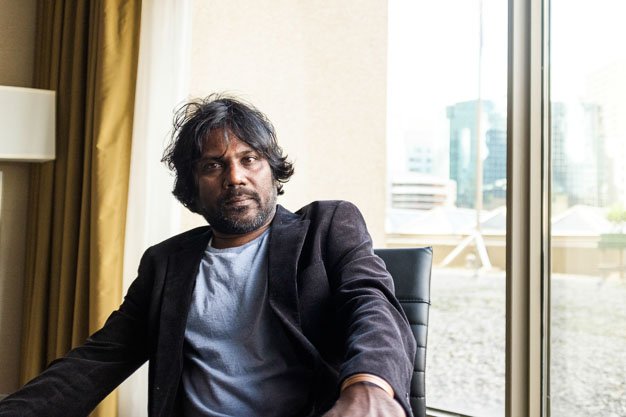 According to Dheepan star Antonythasan Jesuthasan, no other director has captured the Tamil people and their plight as honestly as Jacques Audiard.

“Not even Tamil filmmakers,” says actor.

The Palme D’or winning film follows a former Tamil Tiger who finds refuge and subsequently more violence in France. There was a complete script, attuned to the turbulent emotions and social struggles faced by those escaping Sri Lanka’s bitter civil war, before Jesuthasan even came on board. The actor and novelist only perfected the film’s dialogue to make it fit with Tamil slang.

We’re in a Toronto hotel room hours before Dheepan’s TIFF premiere. Jesuthasan humbly sits up in a desk chair, leaving the sofa seats for his interpreter and myself. We all share his enthusiasm for the film and surprise that such a realistic depiction came from a French filmmaker who before working on the script knew nothing about Tamils and their struggle for a separate state in Sri Lanka.

Jesuthasan, a former Tamil Tiger like his character, knows that struggle all too well. He joined the LTTE (Liberation Tigers of Tamil Eelam) when he was 16 years old in 1983, just after a series of riots that culminated in Black July an anti-Tamil pogrom that killed thousands.

“People from my village went to work in Colombo (Sri Lanka’s Sinhalese-dominated capital) and most didn’t return,” Jesuthasan recalls. “The ones that did came back without legs or arms. Seeing the riots, the burning of our library and 53 political prisons taken captive by the Sri Lankan government, is what inspired me to join the LTTE. They were the most active organization fighting for our cause.”

Jesuthasan was trained and active as a guerilla but also wrote political theatre for the LTTE to get their message across. He left after three years, feeling disillusioned with the LTTE’s tactics.

“When I joined it was a very small organization,” Jesuthasan says. “There was only about 1000 people. They started gaining real power in 1986. I didn’t agree with how they were using that power, killing Sinhalese civilians and banning other Tamil movements who were trying to be peacekeepers.”

After escaping to France, Jesuthasan adopted the pen name Shobasakthi and began writing essays and novels critical of both Sri Lanka’s government and the LTTE. His work has met with opposition among many in the Tamil diaspora who passionately supported the Tigers until the end and refuse to listen to negative opinions.

That’s partly why Jesuthasan is so tickled by Dheepan’s reception in France where it has been been warmly embraced by the very community that regularly oppose his politics.

“I turned to Jacques (Audiard) and said I don’t think they understand the film.”